Ewing, New Jersey (USA) -- In an effort to expose students at the College to more religious and cultural diversity, the Religion, Culture and Identity Learning Community brought the Tibetan Sand Mandala Ceremony to campus last week. 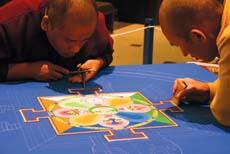 From Saturday, Feb. 9, to Friday, Feb. 15, Tibetan monks from the Namgyal Monastery in Ithaca, N.Y., performed the Tibetan Sand Mandala Ceremony in the New Library lobby.

Originally scheduled to take place in Holman Hall, the coordinators decided to move the ceremony to a more central location to be better appreciated by the campus community.

"The library is more central and ties into the goal for the building of the New Library as a center for cultural and intellectual discussion, not just a place to get books," Celia Chazelle, professor of history and Web master and coordinator of the Religion, Culture and Identity Learning Community, said.

The ritual began with an opening ceremony from 9-9:30 p.m. on Feb. 9 that involved prayer and offerings. Later in the day, Xinru Liu, professor of history, and Jess Row, professor of English, gave a public lecture titled "Tibet, Buddhism Past and Present and the Cultural Meaning of the Sand Mandala," that outlined the historical context of the mandala.

All week long Venerables Lobsang Gyaltsen and Tenzin Thutop painstakingly drew out and then applied grains of colored sand to a flat platform in patterns of geometric shapes and historic Buddhist spiritual symbols in honor of a Buddhist deity.

Jana Olsavska, junior nursing major, said, "When I was watching the monks make the mandala, it made me feel really relaxed and I had to pause and watch them do it for awhile because it brought a sense of peace and harmony into my soul."

At around 3 p.m. on Friday, a Q-and-A session hosted by Pierre Le Morvan, professor of philosophy and religion, allowed students to ask questions of the monks. Students packed the lobby, the stairs and the second floor overlooking the lobby to get a chance to ask the monks about their backgrounds, educations and the importance and religious significance of the mandala.

"I was amazed at the mandala's intricacy, and found the entire event to be fascinating," Patrick Bieger, sophomore international studies major, said.