Trading the World for a Cabin in the Woods

New York, USA -- IT’S my first night in the cabin, and I can’t sleep. The quiet is too loud, as if I were holding a conch shell tight over each ear, and any sounds that do seep through - a wet bulge of snow sliding off a fir tree, the pop of a log in our blazing wood stove - send me tossing and turning, a skittish city mouse in the country. 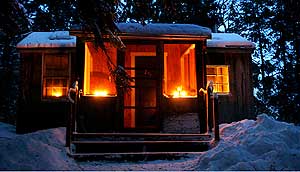 << "Thrush" cabin at Temenos, in northwestern Massachusetts. The remote 78-acre retreat gives visitors a chance to "get away from their lives." Photo Credit: Lori Duff, The New York Times

We are staying atop the modest rise of Mount Mineral in northwestern Massachusetts, my partner and I, tucked into downy sleeping bags spread across a futon in a tiny two-room cabin that has neither plumbing nor electricity. We have come here willingly, to this Quaker-founded retreat named Temenos.

But now it is unnervingly late, and my racing mind settles, albeit briefly, on a scene from just a week before: cocktails at a swank Manhattan hotel bar with friends, who had stupefied reactions to our rustic getaway plan.

“And you’re going there why?” asked one, martini in hand.

I had explained my need to escape — to find some simple peace and quiet in a muffled, snowbound forest that had no chance of cellphone reception.

“That scares me,” admitted another.

I scoffed at the time, but now here I am, awake. What else do I possibly need to relax? And then I notice it: the skylight above our heads has been capped thick with snow since our arrival, but somewhere between my getting into bed and this anxious gazing upward it has cleared, the snow melted off by the warmth of our fire. Now I see stars bright and thick, surrounding a yellow jewel that’s probably Jupiter. The light in the room has changed — from daunting black to a soft-silver glow — and I breathe, falling into my first deep sleep in weeks.

City folk have been finding solace now for more than 25 years at Temenos, a 78-acre forested retreat founded by the late Joe and Teresina Havens. A charismatic Quaker couple with an interest in Buddhism, they purchased the land, which had served as a Civil War-era health resort, and invited groups of friends out to relax and regroup, eventually building four cabins and a lodge, all of which were open to the public.

“Their idea was that being close to nature is healing for the human spirit, and that our lives have removed us from opportunities for doing that,” said Nancy Smith, director of the property.

Though it’s independently run, the property is part of an informal network of simple getaways in the Berkshires called the Western Massachusetts Retreat Association. There are a dozen diverse properties on its Web site, from Stump Sprouts, a lodge and a converted dairy barn that is popular with cross-country skiers, to Woolman Hill, a Quaker-run conference center with three cabins available for private stays.

At Temenos, Ms. Smith, who is a youthful 75, is a constant presence. She said she saw an ad for the job after tiring of a career in international development. “I was hired, and two weeks later I moved in. They were desperate!” she said with a laugh. “It’s been a good match.” She’s lived for eight years now in the large red cabin that once belonged to the Havenses. It’s spare inside, and, like the others, without electricity or running water. But it’s got other luxuries, from floor-to-ceiling shelves of books to a meditation corner that overlooks the forest — places for respite from hard days of loading firewood, pumping well water and other chores.

“People often don’t want to do outright camping, and here you still have that sense of being close to nature and of living simply,” Ms. Smith said. Most guests are from Massachusetts, but some have come from as far as St. Louis, New Orleans and Alexandria, Va. “People all come looking for the same thing,” Ms. Smith said. “They want to get away from their lives.”

I was no exception. But first I had to get there.

The first leg was an easy four-hour drive from Manhattan. The second was more challenging: a hike, about a mile uphill, while lugging plastic sleds, provided at the parking lot, which we’d filled with backpacks of food, clothing, candles, flashlights, sleeping bags, books and Scrabble for the three-day stay. We wore snowshoes rented in nearby Hadley to make the trek easier, as Ms. Smith had warned me in a preparatory phone conversation that there was a good three feet of snow on the ground.

“I haven’t been down the mountain in four days now,” she had said, adding that we should arrive as early as possible, as the cabin would take a couple of hours to heat up and that we’d want it to be warm by dark. Her words loomed large in my mind as we began our journey in, and I began rushing, city-style, to get to the top.

“Slow down,” my partner reminded me. “This is part of the fun.”

I eased up and looked around. And it was wonderful: all the snow I’d felt robbed of during global-warming city winters was right there, crunching under the titanium claws of our snowshoes and weighing down the feathery, nimble branches of fir trees that lined our silent hiking path. I grew nostalgic for walks in the woods of my youth, back when suburbia still had tracts of undeveloped land to explore, and also for wilderness camping trips I’d done in my 20s, from New Hampshire to Oregon. None had ever been in the snow, though, and I marveled at how the stark whiteness threw all of this nature into high relief.

After about 40 minutes we reached our cabin — a squat, wood-shingled box with a nameplate, “Thrush,” and a door frame painted in playful hot pink. The front steps were freshly shoveled, and we stepped inside to find a screened-in porch stacked with firewood; beyond that was a homey, “Little House on the Prairie” meets hippie-camp interior. There were smooth pine floorboards, a table with a single kerosene lamp, wood-panel walls hung with cast-iron frying pans, and shelves with a mix of items from a woven Mexican blanket to a leftover box of Kukicha tea.

A small second room held a futon with three pillows, a mobile of origami cranes and a wonderfully tall window, framing a view of towering trees shrouded in snow. Outside the front door and down a short path was our outhouse — a surprisingly lovely, clean, odor-free little structure perched on the edge of a steep, wooded slope — and, toward Ms. Smith’s house, a well with an old-fashioned hand pump. The water there is rich in iron and manganese, making it murky, rust-colored and tinged with a metallic flavor. But after a day I grew used to it, finding its flavor fresh and sweet.

The star of the weekend, though, was to be a little black box about the size of two milk crates: the wood-burning stove, which awaited us ice-cold and empty in the middle of the kitchen area. “I’d get started on that right away,” warned Ms. Smith, a spry figure in a fleece vest, Muck boots and purple skullcap.

The task proved to be the weekend’s biggest challenge, as the split wood had absorbed moisture and would not catch easily. Even when the fire finally roared to life, we had to huddle around it, gloved palms spread just inches from its hot surface, to feel any of its warmth. Three hours in, darkness had fallen, and I began to worry, lighting the kerosene lamp and all of our candles before crawling into my sleeping bag wearing almost every stitch of clothing I had packed. I watched with growing dread as my breath made thick puffs into the still-frigid air.

Soon, though, our cabin began to feel just as cozy as it looked. Wonderful warmth spread outward in ripples and filled in every corner of space, until we were toasty in T-shirts. We played Scrabble by candlelight and sipped red wine and devoured a supper of canned lentil soup and Annie’s macaroni and cheese that I heated over two propane burners out on the porch. The next day we hiked with snowshoes and trekking poles for three hours on Temenos trails — up steep rises and along ridges and through thickets of oak and birch trees. We rested in the snow and nibbled cashews at the 1,200-foot top of Mount Mineral, and sat again at a ledge that overlooked the valley below, with Mount Greylock and an orange-crush sunset in the distance.

Sleep came easily that night. But leaving, on Day 3, did not. I had become utterly used to the simplicity.

Still, we waved goodbye to our cabin after loading up the sleds like pack mules, taking every bit of trash we’d produced in deference to a colorful, handwritten quote of the Zen priest Shunryu Suzuki that hung on a wall just inside the entrance: “When you do something, you should burn yourself completely, like a good bonfire, leaving no trace of yourself.”

I left only footprints in the snow. But the cabin’s mark on me was indelible.