BUXTON, Maine (USA) -- After revising its plans several times, a Buddhist temple won permission Monday from the Buxton Planning Board to meet at a home on Back Nippen Road. 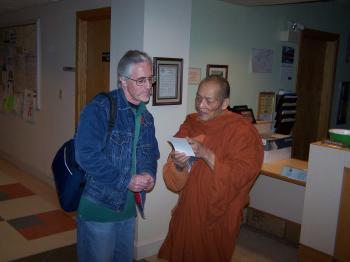 << Cutline (Buddhists 1) – Max Calderwood, Buxton, left, hears about Buddhism from Cambodian Buddhist monk Bak Him in town hall Monday. The Watt Samaki Cambodian Buddhist Temple got permission to gather in its temple on Back Nippen Road. (Photo by Robert Lowell)

However, only a few residents attended the meeting Monday as the permit received unanimous approval from the board. One resident attended just to greet members of the temple.

Max Calderwood said he's been following the hearings on the temple's application with interest.

"I want to welcome them to the community," he said, after visiting with Bak Him, one of two monks who live at the temple, in the lobby outside the selectmen's chamber in Buxton Town Hall.

Him lives at the home at 28 Back Nippen Road with another monk, Chantrea Mean. Temple members plan to meet in a building attached to the home. The house will remain a private residence.

The temple presented plans in January, but received the approval Monday after submitting revised parking plans, scaled back from 67 to 52 cars, and plans for landscaping and controlling storm water runoff. Public hearings drew worries from neighbors about increased traffic and noise in the residential neighborhood. Churches are allowed on the road under Buxton zoning, and the building once housed a commercial printing business.

During the meeting Monday, Janice Laughlin, who lives across the street from the temple, asked whether the conditions the Planning Board had placed on the temple's permit, particularly the construction of a parking lot, would have to be met before members could begin meeting there. Laughlin has been concerned about cars being parked along the road.

Planning Board Chairman Jeremiah Ross said the conditions would have to be met before the temple could begin meeting there.

Buxton Code Officer Fred Farnham will issue an occupancy permit after the temple meets agreed upon requirements and is issued a permit from the state Fire Marshal’s Office.

Leng will meet with Beth Sturtevant, a volunteer who presented the temple’s plans in meetings, to discuss the work and costs. Leng said the temple still has to raise money to pay for the project.

The temple is the only one of its kind in Maine and serves 350 Cambodian families. Most members are Cambodian refugees, who fled the reign of Pol Pot when as many as three million people were slaughtered in the 1970s.

The temple bought the property three years ago. This was the second time the temple had applied to gather there.

Town officials have said a request by the temple two years ago didn’t move forward because the temple didn't provide information planners had requested. The temple, which was founded in 1985 in Portland, sought permission to locate in Buxton 20 years ago, but opposition thwarted approval.

“I’m so glad to have the temple in this town,” said Peng Kem of Portland, a member of the temple’s board of directors.