New York, USA -- The Dalai Lama said that it is important to preserve one’s own traditions and culture but it is wrong to close door to the outside world. He said that one should strive to become a 21st century Buddhist with both traditional values and modern education. 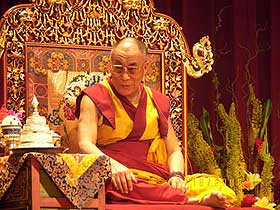 The Dalai Lama told a crowd of about 6000 people that there is no escape from physical depreciation of one’s body but there are ways to train one’s mind in order to attain enlightenment. The Dalai Lama said that merely inviting a religious preacher and getting blessings will not help but the transformation of one’s mind will.

The Himalayan Buddhist Community of New York comprises of organizations of people from Chum, Dolpo, Gyalsumdo, Manang, Nupri, Mustang, Sherpa, Tamang, Thakali, Walung and Yolmo. All these peoples live in Nepal today, and have close religious and cultural ties with the Tibetans.