Washington D.C., USA -- Led by the erudite Ven. Maharagama Dharmasiri thera, the Washington Buddhist Vihara is an inspirational mainspring for the Washingtonians bent on seeking solace from their daily chores. They gathered recently in large numbers to participate in their annual food festival to raise funds. 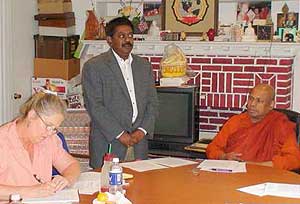 << Ven. Dharmasiri Thera at Temple Board meeting with Ambassador Jaliya Wickramasuriya and other Board member.

It was a way of showing their gratitude to this haven of peace, the oldest Theravada Buddhist Vihara in USA. Sri Lankan Ambassador, Jaliya Wickramasuriya the Patron of the temple led the way mingling with the laity who visited the food festival.

It was a veritable feast with a wide spread. Favorites like buriyani, patties, cutlets and hoppers went as fast as cricket legend Sanath Jayasuriya’s carpet drives to the fence. This year’s food fair was a feather in the cap of the Sri Lankan embassy, its staff and the people who worked hard to make this even a great success.

Later when I visited the temple, Ven Dharmasiri thera showed me around giving a detailed account of the place. He traced back the history of the temple and how so many Sri Lankans had contributed to make it a historic site.

It is the first Theravada temple in North America with a record of yeomen service to the Buddhists and the truth seekers in the region over a period of 40 years.

It is a vibrant cultural center with a hub of activities such as Meditation classes, Sunday school for the largest group of children in the area, Dhamma classes for the adults, Dhamma seminars for university students and Sinhalese language classes for children born in the US.

In 1964 the late Most Venerable Madihe Pannasiha Maha Nayaka thera and late Olcott Gunasekera of the renowned Saama Sevaka Society felt the need for a place of worship and cultural center for the Washington residents and the idea took root few years later.

Temples existing at that were mainly the Chinese and Japanese Mahayana temples and meditation centers-mostly in the West Coast. Chinese monks, Japanese Zen Masters and Japanese Pure Land Ministers were serving the Buddhists but there were no Theravada monks at that time.

History was made on 23rd of July 1965. Due to an invitation from the Saama Sevaka Society, Bhikku Vinita presided over the inaugural meeting of the Washington Vihara.

It had received the blessings of the then Ceylon government. Bhikku Vinita entered an apartment signifying the birth of a Washington Vihara. The initial years saw the arrival of several learned monks who laid the foundation of the gradual growth of the Vihara.

Among them was Ven. Piyadassi Maha thera, who was then going great Sasana work at Harvard. The ambassador Oliver Weerasinghe gave his full support to the serving as the Vihara.

According to the certificate of incorporation for the Vihara filed in Washington D.C in 1966, said that the Vihara was the institute for the purpose of holding meetings, provide the expositions of the Buddhist cultural heritage, maintain a Buddhist library, provide facilities for practicing meditation and other Buddhist disciplines and collect and disseminate information on Buddhism and Buddhist culture.

According to the constitution of society, the legal entity who owned and operated the Vihara society at that time was the Washington Buddhist Vihara, and the abbot or Chief Incumbent Bhikku of the Vihara was appointed by the late Most Ven. Madihe Pannasiha Maha Thera who was first Patron of the society.

Late Ven. Vanita was appointed the first abbot, hence, the first founding President. Others who came after him continued the tradition of building a solid outreach programs to serve the public. Ven. Piyananada thera, Ven Gunaratana thera, Bhikku Bodhi, Ven. Ajita and Ven. Katugastota Uparatana and many visiting monks laid the foundation for the success of the Vihara has attained stature as a center of learning and great fellowship.

Twenty five years ago there were no Theravada Buddhist Theras in USA. Today there are hundreds of centers performing the much needed activities associated with a Buddhist center.

The current Chief Incumbent Ven. Maharagama Dharmasiri Maha Thera, chief disciple of late Madihe Pannasiha Maha Thera arrived in 1987 to take up residency as the chief of the Vihara and the fourth president of the society. He brought considerable experience due to long years of learning and world-wide travel.

As teacher and administrator he provides skilled leadership to the affairs of the Vihara. The temple, residences for the monks, the study and the library and the spacious shrine room bear ample testimony to the care taken by the Chief Incumbent and the monks supporting him and also the foresight and generosity of those behind this historic site.