BENNINGTON, VT (USA) -- The group of 16 marchers methodically made their way north along Route 7 from Pownal to Bennington, with beating drums and Buddhist chants — all to mark Hiroshima Day. 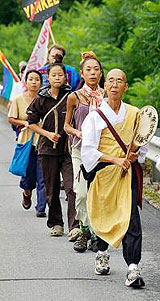 << Jun Yasuda, a Buddhist nun, leads an anti-nuclear walk through Pownal on Wednesday enroute to Bennington

Wednesday was the 63rd anniversary of the first atomic bomb explosion over Hiroshima, Japan. Members of the Citizens Awareness Network and the Nipponzan Myohoji Buddhist order out of Grafton, N.Y., walked the 13 miles to Bennington Monday to mark the anniversary and raise awareness of their quest to eliminate both nuclear weapons and nuclear power.

"There's a great link between nuclear weapons and nuclear power. If we accept one, we accept the other," said Chad, from Florida, who declined to share his last name.

Chad said he has walked thousands of miles, from San Francisco to Washington, D.C., to help raise awareness of the cause. Chad, and others participating Wednesday, said the Vermont Yankee power plant in Vernon is one of the reasons they walk.

The embattled plant, owned by Entergy, has had several mishaps in recent years, including the collapse of a water cooling tower last year. The plant is seeking a renewal of its license to operate for an additional 20 years. The current license calls for its closure in 2012.

Barbara McIntyre, a member of the Peace Resource Center in Bennington, said she organized the event Monday because of the Vermont Yankee situation.

"It's about nuclear power," she said. "Vermont Yankee is in the headlines now, so that's why we're here."

While some were focused on Vermont Yankee, others were concerned with nuclear weapons. One young Japanese woman from Nagasaki, through a translator, said her grandmother could never speak to her about the bomb that was dropped on that city. The grandmother would only say it was worse than hell.

The group will travel to Rutland Thursday before continuing the walk to Burlington through Aug. 9, which marks Nagasaki Day.