First Buddhist ceremony of its kind takes place on Vineyard

West Tisbury, Massachusetts (USA) -- Close to 50 Islanders and visitors who practice Buddhist meditation and philosophy at the Bodhi Path Buddhist Center in West Tisbury attended a unique event this past Sunday, Sept. 7. 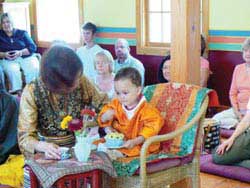 << Yeshe Dorje is looked after by his mother Andrea Strimling at the Sept. 7 ceremony celebrating his recognition as a tulku.
Photo by Neeraj K.C.

Two-year-old Yeshe Dorje, the son of Andrea Strimling and Lama Tsering Ngodup of Arlington, who teaches Buddhist philosophy and meditation at The Bodhi Tree in Cambridge, was officially recognized as a tulku, a reincarnated lama.

Bodhi Path Center member Barbara Dacey reported that the young tulku was identified as such by ShaMar Rinpoche, founder of the center and the third highest lama of Tibet, who presided over the ceremony. For many, the recognition is difficult to understand, as it involves the ability of those who have reached enlightenment to perceive the intangible — an historic gift that is part of the Buddhist practice.

Yeshe Dorje is the grandson of Phyllis and the late Gene Strimling, the brother of Rinchen Dorje and Dinah, and the nephew of Sharon and Mick Florio. The Strimling family owned and operated The Shiretown Inn in Edgartown for more than 25 years.

Sunday’s celebration of this recognition was the first ever event of its kind on the Vineyard. ShaMar Rinpoche and other lamas including Lama Yeshe Drolma, the resident lama of the Martha’s Vineyard center, recited Buddhist prayers and made offerings to the young lama who was dressed in an orange silk robe.

The boy sat in a specially arranged chair placed directly across from ShaMar Rinpoche, and the two enjoyed the traditional tea and rice with the rest of the community of practitioners.