Probing the partnership between Buddhism and the brain sciences

Boston, MA (USA) -- Harvard Professor Anne Harrington discusses the relationship between neuroscience, cognitive science, and Buddhism in the first lecture of the Religious and Psychological Well-Being Project series sponsored by the Center for the Study of Religion and Psychology at the Danielsen Institute. 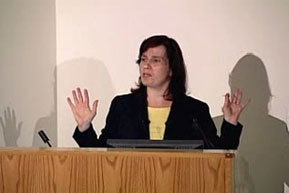 She recalls a 2005 Society for Neuroscience conference, where the Dalai Lama spoke on The Neuroscience of Meditation. He talked to the 13,000 attendees about his curiosity about the world, his affection for science, its benefits for happiness and health, and his belief that science and Buddhism have a lot of constructive things to say to each other. Harrington then asks a key question, “What in the world does Tibetan Buddhism have to do with brain science?”

The rest of her talk attempts to answer the question. Harrington traces the history of U.S. interest in Tibetan Buddhism, talking about the fascination with the eastern brain and transcendental meditation during the1960s and 1970s counterculture. She refers to the research of the University of Wisconsin’s Richard Davidson on the brain functions of Buddhist monks during long periods of meditation.

She touches on studies done by scientists and neuroscientists over the years, from Robert Keith Wallace’s research on meditation as a “fourth major state of consciousness” to the research on stress and its relation to health, in particular cardiac health, of Harvard Medical School’s Herbert Benson.

Many scientists have attempted to study the physiology of advanced meditation, she says, but it wasn’t until the late 1990s that with the help and influence of Buddhist monk and scientist Matthieu Ricard and author and scholar Robert Thurman there was progress in the field. Because of America’s love affair with Tibet, because Buddhism is friendly to science, and because of the encouragement of the Dalai Lama, a partnership between Tibetan Buddhism and brain science is not so anomalous as it may first appear, according to Harrington.

Anne Harrington is a professor and chair of the history of science at Harvard University and a Harvard College Professor. She specializes in the history of psychiatry, neuroscience, and the other mind sciences. She is also Visiting Professor for Medical History at the London School of Economics, where she coedits the new journal Biosocieties.

Harrington received her Ph.D. in the history of science from Oxford University and has held postdoctoral fellowships at the Wellcome Institute for the History of Medicine in London and at the University of Freiburg in Germany. Currently she serves on the Board of the Mind and Life Institute, an organization dedicated to cross-cultural dialogue between Buddhism and the sciences.

She is the author of Medicine, Mind and the Double Brain, Reenchanted Science, and The Cure Within: A History of Mind-Body Medicine and has published many articles and several edited collections.