Washington, USA -- It seems that everywhere you turn lately, everyone is either talking about the election or the economy. Yet GW Buddha Nature Club members don't want to talk about any of that. They want to talk peace. 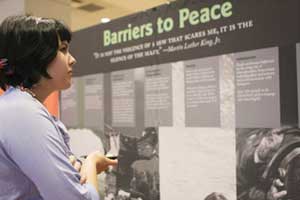 The club worked with SGI, a Buddhist organization, to hold an exhibit on the third floor of the Marvin Center. The exhibit included photographs of children living in war zones, memorable quotations on peace and a list of goals that society needs to meet in order to achieve peace.

Topaz Terry, a representative of SGI, said the "main purpose of this exhibit is to bring together … hundreds of people dedicated to finding a path to lasting peace."

Finding a path to lasting peace is what brought one of the club's founders, Daniel Perez, to Buddhism. Perez said he founded the club with fellow graduate student Skyler Tulchin four years ago because he felt that Buddhism was underrepresented at GW. He said a lot of students might have Buddhist principles and do not know it.

"It wasn't until I took a religion course and was introduced to Buddhism that I realized that, all my life, I've been Buddhist but I just didn't know it," Perez said.

The exhibit, which is meant to get people thinking about how they fit into society, displayed detailed descriptions on the eight action areas the United Nations plans to promote peace, including education on different cultures and disarmament. It highlighted 10 role models and what they did to improve society, including Gerson Andrés Flórez Pérez, a college student from Colombia who wrote a proposal titled "Children of Peace" that helped pass a referendum demanding peace in his home country. Pérez was nominated for the Nobel Peace Prize, but his actions also showed that students can make a difference.

But the club isn't all about Buddhism. Members said it is more about the Buddhist principles of peace rather than the religion itself.

"It's for the happiness," Perez said, adding that the groups members "cover various Buddhist concepts and philosophies with the purpose to apply them to everyday life and become happier and more compassionate young adults."

The club has had more than 150 members from both the GW and Foggy Bottom communities over the years. There are currently about 15 to 20 members regularly attending meetings.

Apart from hosting the Marvin Center exhibit, the club holds weekly meetings every Thursday night at HellWell. They have a list of events planned, including a trip to New York and a Fall Party dubbed "Buddhaween."

"We are a small club," said co-president Mackenzie Drutowski, "but we are also very close."