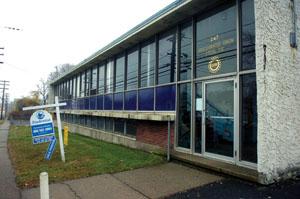 But their hall, which has sat idle for years since the departure of General Motors, may soon ring with the voices of Buddhist monks.

The city’s Zoning Commission gave its unanimous blessing recently to a plan by the Cambodian Buddhist Society of Connecticut to turn the decrepit old hall into a temple.

Gina Newman, a planning commissioner, called it “fabulous” that the Buddhists aim to join Bristol’s melting pot to worship and showcase their culture and faith.

The plan calls for renovating the old union hall at 247 Park St. so that it can house three to five monks who would live there. The old meeting space would be used for worship and other events.

Supporters said there are four major celebrations annually that would likely bring about 250 people to the hall, but most of the time it would be a tranquil, quiet place.

The temple’s quick approval in Bristol stands in sharp contrast to the outcry in Newtown when Buddhists sought to construct a small temple on 10 acres of former farmland — a tempest that ultimately led land-use regulators to shoot down the plan.

In Bristol, however, the request drew a crowd to Thursday’s Zoning Commission session to urge approval of the idea, not to fight it.

Paul Balavender of Canton said he’s been a part of the Buddhist community since he worked in refugee camps on the Cambodian border almost three decades ago.

“They are a very respectful, hardworking, warm people,” Balavender said.

He said that welcoming the temple presented “a unique opportunity for Bristol” to embrace the Buddhists.

Tom Borden, a Willis Street resident, said that the hall “begs for redevelopment.”

He said that the temple would be “a great addition to this community. Diversity is a good thing.”

John Lodovico, vice chairman of the zoning panel, said the building is currently in “great disrepair” and fixing it would benefit the neighborhood around it.

He said the hall was once a site of “great hustle and bustle” that would contrast sharply with the quiet, contemplative life of the monks.

But, Lodovico said, the new use for the structure would represent “a big plus for Park Street.”

“This is an easy one” to approve, Lodovido said.

City planner Alan Weiner asked commissioners to put the brakes on the plan for four months until a study of the West End is complete, but the panel brushed aside his suggestion.

Furey said it would amount to “an unconstitutional taking” to deny the zoning request in order to wait for the study, since land use overseers could have imposed a moratorium in the area if they’d felt the study was that important.

The union hall could accommodate parking most of the time for its activities, but on the four busy celebrations, there would be an overflow of cars in the area.

Furey said they can park at Rockwell Park across the street, a move park commissioners have already approved. The Buddhists said they’d work with the city to try to avoid conflicting with park or Muzzy Field events.

With the zoning approval in hand, Furey said, the society is hoping to arrange financing for the project soon. It’s unclear how quickly the temple could be ready for use.

But officials said they’re anxious to get started.

“They’re just looking for the opportunity to have a true home and be part of the community,” Furey said.