Camden, MA (USA) -- About two dozen monks, nuns and activists arrived in Camden late Tuesday afternoon, part of the Walk for a New Spring, organized by the Nipponzan Myohoji Buddhist Order in Massachusetts. 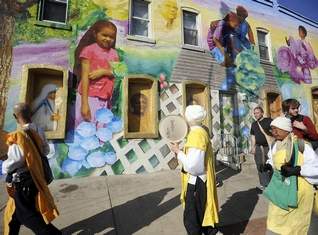 << SCOTT ANDERSON/Courier-Post
Buddhist nuns, monks and activists pass a mural Tuesday in Camden during their journey from Massachusetts to Washington to promote peace.

"I've found that walking for peace is a transformative experience," said organizer Tim Bullock, 60, of Leverett, Mass. "It transforms everything that has kept us in wars for the whole 20th century."

The group began the trek from Massachusetts to Washington, D.C., on Feb. 13 with a threefold message: the abolition of nuclear weapons, the renunciation of war and the conversion to a "peace" economy.

On Tuesday, the walkers went about 15 miles from Burlington City to Camden, and today they will continue into Philadelphia. Their journey will end April 8 in Washington, where they hope to meet with members of Congress and President Barack Obama.

The group arrived at Brigid's House on Ferry Avenue around 4 p.m. and walked to a nearby community garden, where the members marked St. Patrick's Day by planting potatoes with area youths before sitting down to dinner.

As she taught 10-year-old Terrell Moore how to play her peace drum, Sister Clare Carter said the visit with the children provided a much-needed second wind.

"This is such a happy moment, to see so many friends, so many children here," she said. "It gives me such joy to know they have the power to heal Camden."

For many, the walk's message was deeply personal.

"I'm going to leave this world to people I love, and it can't be sustained if we continue to make war," said 76-year-old Nancy Smith.

Bullock and several others said they've seen one noticeable change this year.

"I see more hope in the reaction to us," he said. "It feels like we've moved away from fear."

"There's more enthusiasm, instead of complacency we've seen through this last decade," agreed Betty Wolfson, 60. "There are calls to create change. People want to do whatever they can."

Mandan Hirose traveled from Tokyo for the 55-day walk to push for a global peace amendment similar to Article 9 of Japan's Constitution, adopted after World War II, which renounces war as a country's right.

"It's important," the 71-year-old Hirose said. "Peace is the most important thing for the world."