Amherst, MA (USA) -- Bernie Glassman doesn't look like a Zen master. At 70, Glassman looks more like an archetypal Happy Valley male: wild gray hair temporarily tamed by a pony tail; thread-bare Hawaiian shirt; sandals (modern ones, not the Jesus kind); cartoon piggies on his suspenders. You might even find him with a cigar hanging from his mouth. 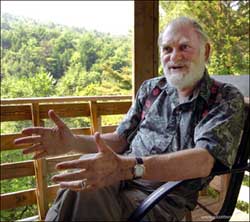 << ANNA MILLER
Bernie Glassman of the Zen Peacemakers of Montague.

These are merely a few of the external details about Glassman, the spiritual leader and founder of the Zen Peacemakers, an organization in Montague devoted to socially engaged Buddhism.

Zen Buddhism, a religion based on meditation and right living with a goal of enlightenment, historically eschewed activity in the world until one's spiritual self was fully forged. Glassman and others have sought to change that by pairing social action with one's traditional Zen training. It's movement that's growing and will culminate next summer with a symposium that's due to draw in all the major players in socially engaged Buddhism, Glassman says. Richard Gere, Gary Snyder and Jeff Bridges are among those expected to attend.

One of the Peacemakers' methods of engagement are Zen Houses, which are spiritually based community outreach centers that the Zen Peacemakers are seeking to build all over the globe. Such houses, each based on the needs of the host community, are planned for nearby Orange and for Canada and Poland, among other locations.

The Peacemakers also promote the act of bearing witness as a way to embrace the suffering in the world. That's accomplished though street retreats, where practitioners live with homeless people in metro areas or by visiting the death camp Auschwitz for extended periods of time.

I caught up with Glassman this week at the Zen Peacemakers center on Ripley Road in Montague, near the Leverett line. We sat in 90-degree heat on a deck overlooking the Sawmill River and North Leverett Road, and talked about his life in Buddhism. Some of Glassman's words follow.

On the first tenet of the Zen Peacemakers:

"We have three tenets, which I think encapsulate the trainings in Zen. The first, we call not-knowing. That doesn't mean not having knowledge. It means not being attached to the knowledge we have. It's all sitting there, but you're not stuck to it.

"Throughout the years of Zen, there have been all kinds of techniques to help you drop those attachments. Meditation is a basic one. Koan study became a technique for helping you let go of attachments. Shouting, screaming, the use of sudden jolts, are ways. It causes you to let go of your attachments when that happens.

"I added a technique that we use a lot, which I call plunges: bring people into situations where their rational mind doesn't work; they lose it. Auschwitz is one of those. The first day of our Auschwitz retreat, it's planned to where you're overwhelmed, and you can't rationally make sense of anything. You wind up in that state of not-knowing. Street retreats do the same, but many things do the same. You make practices out of it. Being with a loved one when they're dying can do the same. It takes you out of the position of thinking that you know how to take care of something, or that you know the answer to something."

On the second tenet:

"The practices that bring you to not-knowing are all sudden practices; they're moments. Bearing witness is learning how to stay in that situation. ... And meditation is the most common form we have of bearing witness.

"In the street retreats, we stay in the streets. We bear witness to what is happening. ... The people that go for the first time on the streets generally have two concerns: one, that they'll be hungry, and the second is fear, that there'll be an attack or something is going to happen. I've led dozens of (these kinds) of retreats. That's never been an issue. The main issue has always been something that people don't think of, which is that they are ignored by the people, and that's the biggest transformation that comes about."

On the third tenet:

"Our third tenet is loving actions. Those are actions that arise out of the first two (tenets). That is we promote doing something for others, so it's not just a place for you to come to learn how to get into the moment and bear witness to that moment.

"If you're going to train with us, you've got to learn both of those, but you're also going to be encouraged to work for others. There has been a time in Buddhism in this country, where (socially engaged Buddhism) was looked down at. It didn't have the highest rep, but now it does."

"I've been involved in Zen for 50 years. I'd say in the last 30 years, my interest has been in bringing the fundamentals of Buddhism into outreach, into social action. When I first started, almost no Westerners were doing that. ... There were a lot of people saying that wasn't a correct thing to do. They felt that the emphasis should be strictly on getting one's own enlightenment deeper, before you do anything. ... If you got involved in Buddhist centers, you were learning meditation practices, or chanting, you were learning different skills or ways of attaining a realization of the oneness of life. That's the message of Buddhism. Buddha is the awakened one, so the various schools of Buddhism are different ways of awakening, and (that) means awakening to the oneness of life and the interdependence of life.

"The emphasis was on established techniques for doing that over the last couple thousand years. We're still involved with all of those, but we're also encouraging and promoting the use of socially engaged Buddhism as a form of practice, as a way of realizing the interdependence of life."

On being a Zen mensch:

"One of my interests is in westernizing the practice of Buddhism. An icon of Mahayana Buddhism is the bodhisattva; for me, the mensch is a Western term for bodhisattva. Our symposium, we're calling that symposium "Becoming a Mensch," and we're giving the pioneers of the movement mensch medallions.

"For me, a mensch is someone who is naturally doing work for others. Not separate from the others, but naturally is taking care of the others, and does it without a sense of doing it. So there's no pretension, no self-recognition. They're just doing it because it has to be done.

"Very rarely when I give talks or workshops, I rarely ever use terminology that has an Asian root. I've spent years trying to change the language into a common language, a simple language, and language that anybody can understand. I'm not hiding behind some highfalutin term."

"It will be a marriage between what the needs are of the community and what the skills are of the people who go there. In general, the Zen House leader or Dharma House leader will be indigenous to the area where they open up. That's one of our rules. They could be Buddhist teachers; they could be not-Buddhist teachers. To be a leader of the house, they have to go through our training. We have a four-month residency program here in Montague at this facility. Then they have a five-month internship in a house. Then they have one year working as staff somewhere at one of the houses. Then if they want to open their own Zen House, they have to the capacity to do that, because they'll be independent places. They'll have to do the fundraising, or what we're encouraging people to do is entrepreneurship to build some kind of businesses so that they can create jobs. Mostly, they work in areas where there's high unemployment.

"This is new for the Buddhist world. One of our main tasks is to find out who out there in the Buddhist world is interested in such a thing, and letting them know that now is a possibility. This is allowing them to put together their Buddhist practice and their desire to serve community."