For now, 16-foot figure on side in temple parking lot

UTICA, NY (USA) -- When members of a Buddhist temple in North Utica purchased a large religious statue from Vietnam, they didn’t envision it sitting on its side covered with white wrapping in a crate in the temple’s parking lot. 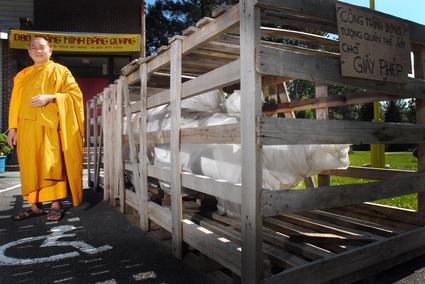 << NICOLE L. CVETNIC / Observer-Dispatch
Ven. Thich Minh Hien stands at the base of a 12 ft. long Buddhist statue that he and others hope to display in front of the Dao Trang Minh Dang Quang Temple, Friday, September 4, 2009 in Utica.

But that’s exactly where the statue of Buddhist religious figure Quan Am and two dragons is located. And due to a recent decision by the Utica Zoning Board of Appeals to deny a variance for the statue, that’s where it will have to stay unless there’s another zoning hearing.

Utican Tom Doan said he was surprised the variance was rejected and is looking into what the temple can do next.

The statue could assist the temple with attracting Vietnamese immigrants to the area and keeping them here, and the temple could even become a tourist attraction for Utica, Doan said.

“Please allow us to have this,” he said of the Quan Am statue. “It means a lot. Some pray for her more than Buddha himself.”

The Dao Trang Minh Dang Quang Temple has been located at 190 Riverside Drive in Utica for more than a year.

Many of the about 100 members of the temple put in money toward the $40,000 it cost to buy the Quan Am statue and other statues and ship them from Vietnam, temple members said.

But when they went to erect the statue, they found out they need a variance because city regulations limit the height of an accessory structure in a residential district to 10 feet. The statue is 13 feet tall and would stand on a 3-foot platform – bringing the total height to 16 feet, according to zoning board records.

There also is a 4-foot base that would be underground and two 3-foot high dragons that would be on the sides of the Quan Am part of the statue.

After some residents spoke during an August meeting about their concerns with the size of the statue, the Zoning Board of Appeals rejected the variance with a 4-0 vote. Board Chairman Joseph Priore signed the resolution Aug. 21.

Sharon Zdanowicz, who lives on Utica Road near the temple, said she was worried because her house is only 11 feet tall, and a statue taller than that would be disruptive to the residential setting.

“Would you like to be sitting in your backyard and looking over your house and see a statue staring at you? Not me,” she said. “I have no problem with them putting one, but I think that’s a little ostentatious for the area.”

Temple members hoped to have the statue in place in time for the celebration taking place there Sunday for Ullambana Day – or the Buddhist Remembrance of Our Parents’ Day, Utican Missy Lai said.

Instead, a small wooden stick is stuck in the ground where the statue was supposed to go – on the side of the building facing out toward the street on Riverside Drive.

Lai, 37, said she moved from Vietnam to Utica when she was 15, and now she wants her children to be able to learn about Buddhism at the temple.

Inside the temple Thursday, in a large room in which everyone takes their shoes off before entering, Lai’s children and other kids played in front of a large Buddha statue.

Ven. Thich Minh Hien, a monk who permanently resides in the temple, walked around wearing an orange robe and interacted with another monk from Florida who was visiting for the week.

The temple was established in Utica, so local Vietnamese no longer would have to travel to Albany or Syracuse, Lai said.

It’s disappointing that a small difference in height would stop them from being able to put up the Quan Am statue, she said.

North Utica Councilwoman Teresa Wojnas, R-6, said it’s unfortunate the statue already was purchased, but she also understands the concerns of residents in the neighborhood about the size of the statue.

The temple is zoned for a religious building, but it’s still in the middle of a residential area, she said.

But Doan said he doesn’t understand why residents would be concerned about the statue.

“It won’t degenerate or detract from the property by any means,” he said.

Peg Roberts of Riverside Drive said the people from the temple have been fine, peaceful neighbors.

“It certainly isn’t anything about a religion or a race or anything like that,” Roberts said. “It’s just we want to leave it residential.”

A bed and breakfast across the street from Roberts doesn’t even have a sign out front advertising the business because people nearby don’t want the residential feel disrupted, she said.

The large Buddhist statue also wouldn’t keep with the flavor of a residential neighborhood, she said.

The Zoning Board of Appeals likely would be “very open” to conducting a rehearing on the matter and trying to come up with a solution that satisfies temple members and the neighbors, board Chairman Joseph Priore said.

The board would have to unanimously agree to rehear the issue and unanimously approve a change in the decision, he said.

During the August meeting, Priore, Leonard Vetere, Marianne Brooks and Gary Wereszynski voted to reject the variance. Board member Joseph Burke was absent.

The board attempted to present alternate solutions – such as conducting excavation to place the base of the statue farther underground so that the statue’s height would be below 10 feet – but all suggestions were rejected by the temple members, Priore said.

Lai, who did not attend the meeting, said she was offended by some of the suggestions and was told that one idea was to cut off the statue’s feet.

“That is not our religion,” Lai said. “What kind of religion has no feet? If you do it, that is no respect.”

Priore said he doesn’t recall suggesting cutting the stone statue as one of the options, and he hoped no other ideas were taken as disrespectful.

“I wouldn’t ask someone to cut it in half just because it doesn’t belong to the same religion that I do,” he said. “If it was perceived of like that, I would apologize for that. That’s not the intention because everyone has the right of their freedom of religion.”