UTICA, N.Y. (USA) -- After losing several rounds with the city Zoning Board of Appeals, a North Utica, N.Y., Buddhist temple is taking to court its fight to erect a white marble statue in its front yard. 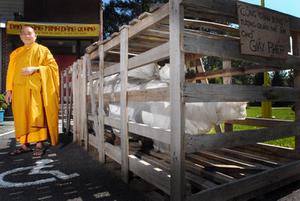 << ARCHIVED PHOTO NICOLE L. CVETNIC/Observer-Dispatch Ven. Thich Minh Hien stands at the base of a 12 ft. long Buddhist statue that he and others hope to display in front of the Dao Trang Minh Dang Quang Temple, Friday, September 4, 2009 in Utica.

In documents filed earlier this month in state Supreme Court, an attorney for the Dau Trang Minh Dang Quang Temple argues that opposition to the 12-foot statue of a Buddhist saint stems from the board's unwillingness to consider the statue's religious significance, and not its desire to rigidly adhere to city height restrictions that limit “accessory structures” to 10 feet.

The Quan Am statue's total height has been in flux. The temple first planned to place the statue on a 3-foot pedestal, but at the November meeting said it would jettison the platform to reduce the total height.

It will be flanked by two 3-foot-tall dragon statues. Temple members had planned to place the statue 20 feet from the sidewalk at the edge of the property, which is in a neighborhood of streets lined with mostly single-family homes.

“A temple is not a temple without Quan Am,” attorney Stephen Lockwood wrote in a September 2009 letter to the Zoning Board of Appeals.

Lockwood declined Tuesday to comment on the court filing, which names the city, the Zoning Board of Appeals and its five members. In the documents, though, he argues that the board should have approved a variance because the statue has religious significance.

“There is utterly no negative impact on the neighborhood,” Lockwood wrote. “The only impact is to prevent the temple and its members from being able to worship according to the fundamental tenets of Buddhism, the same way any other religion would worship its saints.”

Linda Sullivan Fatata, the city's top lawyer, said Tuesday that discussions that could lead to a resolution palatable to both sides were under way.

“We certainly are looking to do what's best for everyone involved,” she said.

The court filing asks Judge Anthony F. Shaheen to approve a variance from the zoning code that would permit the statue's installation.

The legal action follows two unsuccessful attempts to get the city's five-member Zoning Board of Appeals to intervene.

In November 2009, all four members present at a meeting voted to allow a second review of the plan, after turning down the first request for a variance.

At that meeting, three members voted to allow the statue. Member Marianne Brooks voted against it. A unanimous vote was required, and the statue has remained in storage. Reached by telephone Tuesday, Brooks said she would call back with a response, but never did.

A handful of neighbors on Riverside Drive and nearby Utica and Kingston roads spoke at zoning hearings to oppose the plan.

That view, however, is not shared by everyone who lives nearby.

To Jodi Guyett, 40, who lives next door, the issue is not about religion. She said she'd been on a tour of the temple, and had never been bothered by it members.

Then she paused in her doorway.

“Sometimes I feel guilty saying it.”