By DAVID HUTTER and MIKE AGOGLIATI, The Register Citizen, April 11, 2010

Litchfield County, CT (USA) -- A Buddhist congregation finds itself with a distinctly worldly problem — the temple is being taxed on a piece property members say they use for a holy purpose. 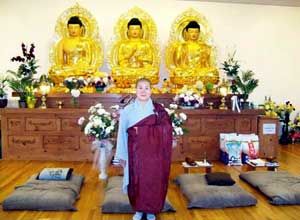 << A monk at New Hartford’s International Buddhist Zen Do satnds in front of a prayer shrine. The Buddhist congregation is struggling to meet a tax bill of $13,589.52 levied on a property they say should be tax exempt.

“Right now we are just a survivor,” Sue Yen Sunim, a monk at Dae Yen Sa Buddhist Temple in New Hartford said. “I automatically thought we do not need to pay taxes because we are a religious organization.”

The Buddhist congregants worship at their main property at 19 Kinsey Road. Sue Yen Sunim explained that her fellow Buddhists use their Hoppen Road land as a sacred place where they scatter the ashes of the deceased. The Hoppen Road property is a few miles away from its Kinsey Road property.

“Rules are rules. They have to charge the tax, and then we have to pay,” Sue Yen Sunim said. Some fellow Buddhists cast doubt on why they have not built a road or prayer room on their Hoppen Road property.

Buddhists cremate the bodies of their deceased and scatter their ashes.

“My lawyer, I asked him to make us become tax-exempt,” Sue Yen Sunim said. “Still, it takes time.”

“If we have enough money, we can give a donation to New Hartford Town Hall,” she said. “I thought in waiting we are going to have a big project.”

“We did not do anything because it costs too much money to create a driveway,” Sue Yen Sunim said. “We need at least $100,000 to build a driveway across the mountain (on our Hoppen Road) land.”

She wants to build a driveway for more than one reason.

“We take two hours round-trip walking across the land to scatter the ashes of our deceased.”

According to Sue Yen Sunim, her lawyers understand that the organization would be tax-exempt if it were to build a driveway on its Hoppen Road property.

“We are not complaining about paying our taxes,” Sue Yen Sunim said. “If we get enough money to build a driveway and a prayer room, if we have leftover money, we will give it to New Hartford Town Hall.”

However, according to Yen Sunim, the congregation does not have money to build a driveway or a prayer room. Yen Sunim consulted her lawyers because she believes the organization should be exempt from taxes on its Hoppen Road property.

New Hartford assessor Beth Paul said that as far as she knows, no one is buried on the Hoppen Road property.

“As a religious organization, certain things are tax exempt,” Paul said. “Personal property of the organization, such as motor vehicles, and anything inside of the church would be exempt.”

“If they had a building on the property that was used as a school, a daycare facility, a nonprofit camp or recreational facility for religious purposes, then it would qualify as being tax-exempt,” Paul said.

The law grants an exemption of taxes on property that is held for cemetery use, but specifies that the land must be “exclusively for cemetery purposes.”

Yen Sunim noted that other denominations do maintain similar properties, that they use for their own religious use as they relate to death.