By LINDA SADLOUSKOS, MyCentralJersey.com, May 3, 2010

SOUTH PLAINFIELD, NJ (USA) -- The New Jersey Buddhist Culture Center on Sunday celebrated Buddha's birthday with a ritual of spiritual cleansing, as the first of many special events the center's leaders and members said they hope will take place in their new home. 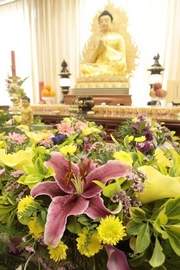 << Flowers that took three volunteers ten hours to arrange adorned an altar for the Buddha at The New Jersey Buddhist Culture Center for their celebration of the Buddha's birthday and fundraiser for the renovation of their new center in South Plainfield. (Augusto F. Menezes / MyCentralJersey)

Buddha's birthday celebration, part of a multicultural festival to which the public was invited, was held at the center's new location at 1007 New Brunswick Ave. The center purchased the former Christian school late last year and moved in early this year, said Miao Zhong, a religious leader at the center.

The center has shifted around through rented quarters since it was established in 1996 in the basement of an area home, said Ellen Yu, a member and spokeswoman for the center.

The center, affiliated with the state chapter of Buddha's Light International Association, attracts members from Somerset, Middlesex and parts of Morris and Monmouth counties, Yu said.

Sunday's celebration offered visitors vegetarian food, entertainment and items such as pottery, art and jewelry that were sold to help raise money for the center's building fund. A fundraising drive is under way to renovate a now-vacant portion of the building so it can house classes for members and the general public, Zhong said.

Class subjects will include yoga, meditation, vegetarian cooking and other aspects of Buddhist culture, Yu said.

The center already holds programs about Buddhism, said Zhong, whose title at the center is "venerable."

The focus of Sunday's event was a "Bathing Buddha" ritual. The annual ritual was performed in front of statues of Buddha and religious offerings set up in a small room where Yu said services are offered each Sunday.

Over the course of the day, about 200 to 300 people entered the room, where they prayed and poured water of a small statue of Buddha, Zhong said. She said Buddha's actual birthday will be celebrated on May 21 this year, but not all Buddhist centers schedule their celebrations on the same day.

The "Bathing Buddha" ritual highlights the universal message that there is a need to wash away the past year's accumulated greed, anger and ignorance, Yu said.

Members also volunteered to serve food or help out in other ways at Sunday's celebration.

Nicole Sai of Colonia, one of those volunters, said she has been a member since 1996, when she was about 10 years old. She said she is happy the center finally has a real home. "I'm tired of moving. Now, we have more space for more events and gatherings," she said.

Echo Lim of North Brunswick, originally from Malaysia, said she volunteers as a language interpreter or however else she is needed. She said it is good to be at a center where she can share Buddha's teachings with others of a similar background. "It's very calm and peaceful," she said of the center.

The center has more than 700 members, Zhong said. Most members are of Chinese background, with some from Malaysia and Indonesia, the center's leaders said.