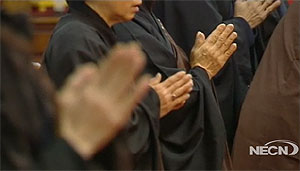 The monks lead the service which will go on for an entire day.

Kwen Sik told us that buddhism teaches that all creatures  are equal, and that she and others have great sorrow for the disastrous events in Japan. The Tsunami and earth quake are enormous disasters...and their hearts are with the people of the island nation as it struggles to right itself.

She says when she first saw the frightening images on her television, she felt great sadness.

The temple filled with people, a collection was to be taken up for a relief fund.

Sandy Wong-NG said she could not watch the suffering that the country of Japan is enduring.
Sot

Buddhists believe that everything is interconnected - every object, being, and concept is connected to what caused it, and what is around it. They are hopeful that their prayers will provide comfort.