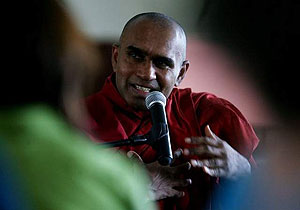 << Bhante Wimala, a traveling monk, speaks at the Center for Spiritual Living in Morristown. He made a rare appearance to address the issue of karma in everyday life. / STAFF PHOTO: MARK R. SULLIVAN

"When you really understand karma, you can master your life and pull yourself out of pain," said Bhante, a title meaning "Father" in the Theravada Buddhist tradition.

Since 1994, he has been chief monk of the United States, a responsibility bestowed by a council of monks in his native Sri Lanka.

The karmic cycles going round and round a person's mind — whether positive or negative — shape the quality of his or her experience, said Bhante. Karmic cycles even transcend samsara, a term for the cycle of birth and death.

"Action and consequences, together, we call karma," he explained. "You dislike somebody and you think an angry thought. The minute it rises, it has an effect. When you think negative thoughts, you are in pain."

"Pain is very dangerous," Bhante said, "because it is a distortion of perspective. The nature of the mind is such that the more intense the negativity, the easier it is to repeat it. When negative behavior is repeated, you become a negative personality."

And negative personalities, he added, tend toward depression, violence and negative relationships for a simple reason.

"You attract what you radiate," he said.

The way out is to understand the karmic cycle — or awaken to it — and cultivate positive thoughts, which are filled with clarity.

"Say you were abused," Bhante said. "If you stand tall, stay patient and face that abuse with clarity, you will not suffer." An audible gasp was heard throughout the room as Bhante continued.

"That person is abusing you because of their own pain, but you are suffering because of your own reaction," he added. "How long you suffer depends on how much negativity you generate."

The flow of teachings rolled for hours, with questions punctuating the talk: Isn't anger all right if it helps a person stand up for peace? What about collective karma, when whole groups seem to hate each other?

Bhante, whose Triple Gem Society reconstructs villages in many dangerous, war-torn areas of the globe, re-focused the questioners to their individual states.

"If you are standing for peace," he said, "find yourself some peace first. You cannot change the world positively if you are living in a pool of negativity."

Participant Joan Lloyd of Mendham hears Bhante speak whenever she can.

"It's very peaceful and soothing to be in his presence," she said, adding that hearing him always is an emotionally moving experience.