Austin, TX (USA) -- The head teacher at the Austin Zen Center referenced Kurt Vonnegut and the Christian creation story in the Saturday morning Dharma Talk - a signal that the center embraces the mixed cultural and spiritual identities that shape most Austinites. 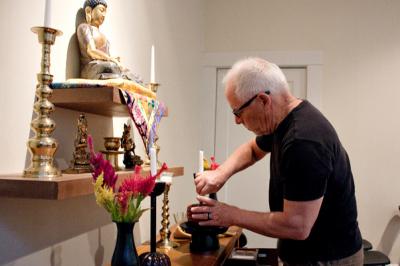 << Charley Tucker cleans the altar as part of the soji ritual at the Austin Zen Center Saturday morning. During soji all members of the community clean the inside and outside of the temple.

Charley Tucker cleans the altar as part of the soji ritual at the Austin Zen Center Saturday morning. During soji all members of the community clean the inside and outside of the temple.

Members of the sangha - community - include individuals who have studied Zen for decades and those who have come to it in recent weeks. Some people who cross their legs on the black cushions have left other religions, while others want to supplement their faith practices or are seeking spiritual community for the first time.

East Asian countries have practiced Zen Buddhism since the seventh century, and it became popular in the United States in the 1950s and ‘60s. Zen focuses on the attainment of self-realization and enlightenment through meditation and study of the dharma, the natural order of things.

Colin Gipson is the teacher’s assistant at the center, where he started practicing in 2000. He said Buddhism attracts people from many corners because Zen “doesn’t pick and choose.” College towns like Austin frequently have centers because the populations tend to be open-minded, he said.

“Buddhism is the only thing that ever made sense to me,” Gipson said. “It’s about sitting down and not running from my suffering.”

The sangha at the center is supportive of each other and welcoming to new practitioners, Gipson said. The center holds a beginner’s meditation every Saturday morning to teach the physical and mental aspects of zazen.

The silent form of meditation most common in Zen can be intimidating, as it requires a focus on breath and self that doesn’t enter into most people’s daily life. Pat Yingst, one of the practice leaders, said it can be hard at first to avoid thinking about daily tasks in the midst of meditation.

However, the Saturday morning program of a shorter meditation, a dharma talk and tea and cookies, provides a comfortable atmosphere for exploring meditation and Buddhism for the first time.

The main facility is warm and open, with wooden fixtures and large windows in the zendo, where most meditation takes place. The kitchen is a common space for members and guests. A large tree in the front yard almost begs to be sat under.

Leah Collier travelled to Austin from San Angelo to visit the zen center after studying Buddhism on her own for a few years. She attended the beginner’s meditation and dharma talk - the Buddhist equivalent of a sermon - Saturday morning with her spouse, Arlene Harbison.

“It was emotional but very enlightening,” Collier said. “I have a better understanding from just one talk about how to deal with emotions in a grounded way, how to react instead of overreact.”

Member Collin Whites started visiting the center regularly in June after receiving a medical discharge from the United States Navy.

“Something had changed, and I wanted to move forward in a new way,” Whites said. “I wanted a place of community, healing and growth. I find practicing meditation in the morning helps me be more present and be at attention, or to change my attention when I need to.”

As the zendo cleared out after the morning program, that sense of peace and clarity remained.