BAYOU LA BATRE, Alabama (USA) -- Down a gravel road, on the grounds of a Vietnamese Buddhist temple, the statue of a female figure rises 30 feet tall. Her name is Bodhisattva Quan Am. 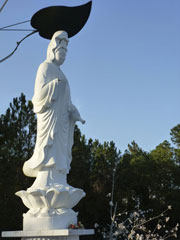 << At the Vietnamese Buddhist temple in Bayou la Batre, Al., the Bodhisattva Quan Am rises among the pines. A bodhisattva, says the temple's monk, Thich Thien Thai, is an enlightened being who helps show people the path to understanding and knowledge. Quan Am, found throughout many Asian countries, can be likened to a goddess of mercy, says the monk. (Roy Hoffman/Press-Register)

A bodhisattva is an enlightened being who helps show ordinary people the path to understanding, says the temple’s monk, Thich Thien Thai.

Lighting incense, people kneel before Quan Am, recite prayers, and ask for blessings. Women are especially prone to beseech her favors, he says.

Thai likens her to a goddess of mercy.

"If there is danger in family, you pray for safety."

While rare in south Alabama, Quan Am’s image is prominent in many parts of the world, including China, where she is called Quan Yin. Other countries that practice Mahayana Buddhism — including Japan and Korea, along with Vietnam — invoke her.

In countries rooted in Theraveda Buddhism, like Cambodia and Laos, Quan Am is rarely found, Thai says. Her name in Sanskrit, Thai explains, is Avalokithesvara, meaning "hearer of cries."

Quan Am, says the monk, "listens to the sounds of the suffering people."

To Thai, who arrived in this coastal fishing community two years ago, Quan Am is a daily presence.

As the monk sits in his residence adjacent to the temple, he looks up at a wooden replica of Quan Am on his kitchen table.

When Thai rises and walks through the sanctuary to the front door, he passes a brightly colored statue of Quan Am sitting next to the Buddha.

On the temple’s landing, at the top of stairs, he looks out at the giant statue of Quan Am across the yard. She stands on a lotus flower with a lotus leaf over her head, symbols of purity and enlightenment.

In her left hand, he points out, is a pitcher.

"It is filled," he says, "with the water of compassion."

Her right hand, by tradition, makes the sign of the Buddha, palm facing outwards, thumb touched to middle finger.

But this Quan Am’s right hand is missing — a vandal knocked off her hand, he says sadly.

Thai, 44, grew up in the Vietnamese coastal city of Nha Trang, in Khanh Hoa province.

After deciding at age 13 to become a monk, he says, he studied Buddhism, going to India and other places, then returned home.

Prior to south Alabama he was stationed at a Buddhist temple in Houston.

A local Vietnamese association brought him to the bayou area "to teach knowledge," he says.

Ten years ago, the statue of Quan Am was brought to the bayou and erected near the temple. She withstood Hurricane Katrina and other storms, Thai says.

Quan Am will be moved in the near future to a new temple being constructed several miles away. Across the street from the temple is a seafood processing plant; a few blocks away is Alma Bryant High School.

Over a fence are mobile homes and small houses. A block further are shrimp boats and fishing docks.

The encircling property of the temple — named Chua Chanh Giac, meaning, says the monk, "temple of enlightenment" — is like a world apart.

On the wall of a reflecting pool in front of the large Quan Am — the water is muddied by weather — another figure of the bodhisattva sits, small and serene.

To her right is a bowl with sticks of incense burned out.

Thai lifts the small Quan Am gently, moves her back toward the edge of the wall, then situates the incense in front of her. He pauses, regards the arrangement, evens up the statue and the bowl.

Several days have passed without rain, and Thai takes up a garden hose and begins to water the flowers around the pool.

Bamboo acts like a curtain around parts of the pool.

Squinting in the afternoon sun, he peers up at Quan Am.

A person who comes to her feet may look up and implore, he says: "I have hurt. I have pain. I need for bodhisattva to listen."

Then the sun passes behind Quan Am and she gazes down, as though ready.