As a new monk, Sittisak Chariyasuwan must follow 200 rules at Wat Buddharangsi of Miami, a Buddhist temple in South Dade. 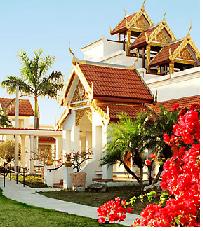 The statue’s black eyes look down at seven chanting monks, all clad in saffron-colored robes.

On the morning of Aug. 25 at Wat Buddharangsi of Miami , a Buddhist temple in South Miami-Dade, six monks ordained 44-year-old Sittisak Chariyasuwan as a new member of their order.

Chariyasuwan said he chose to become a monk so he can study the Buddha’s teachings, or the dharma scripture.

“If you really want to know Buddhism, to really get into the core of it, you have to get into monkhood,” he said through a translator.

Buddhists follow the teachings of Indian Prince Siddhartha Gautama, who in 500 B.C. became known as the Buddha, or enlightened one. His teachings focus on the proper way to lead life so that nirvana, a state of release into ultimate enlightenment and peace, can be achieved.

Traditionally, the eldest son in a Thai family enters monkhood at 20. This expectation has become more lax, allowing men to become monks at a later stage in their life – if they wish to be monks at all.

The two-hour ordination ceremony is the culmination of many weeks, in some cases even years, of studying Buddhism.

Chariyasuwan said he spent two weeks in seclusion to learn the Pali prayers he chanted during the ceremony. Pali is the language of the Buddha’s teachings.

At the Saturday-morning ceremony, he and the other monks chanted these Pali prayers that droned through the temple. A gong’s sound reverberated and Chariyasuwan’s friends and family gave him gifts of things he may need during monkhood such as several sets of saffron-colored robes.

The monks asked Chariyasuwan questions quizzing his morality and eligibility to become a monk.

Like all other Buddhist monks, he has to abide by more than 200 precepts, or rules that guide the way he should lead his life in monkhood.

Vichate Ungvichian, a member of the temple’s Board of Directors, said a new monk has to put away superficial distractions and focus on studying the dharma.

So before the ceremony, Chariyasuwan’s hair and eyebrows were shaved.

“You don’t have to worry about combing your hair. You can focus on studying,” said Ungvichian.

Even everyday tasks have to be done in a certain way.

Monks have to walk slowly, speak in a low tone, sit at an elevated level compared to laymen, dine only twice a day, both times before noon, and even shower in a particular way.

All monks live in dormitories at the temple. Their day begins at about 5:30 a.m. with chants. After that it is common for monks to visit families or establishments, like restaurants, to give blessings.

While some remain monks for a few days or months and then go back to being laymen, others dedicate themselves to monkhood for the rest of their lives.

Phrasiridhammavidhesth Boonnom, the temple’s abbot, became a monk when he was 20 years old in his home village Nong Boua in Thailand.

“Before I became a monk, I didn’t know anything about Buddhism,” said 74-year-old Boonnom.

But the more he stayed, the more he learned and understood the Buddha’s teachings, he said.

Boonnom is also founder of Wat Buddharangsi. Since its inception in the late 1990s, the South Florida temple has been a home to Asian-Americans as well as to people from other cultures and religions who are interested to learn about Buddhism.

He always had an interest in religions, so one day he came to the temple and a monk started teaching him about Buddhism.

In Thai tradition, a novice is a monk who is younger than the age of 20 and instead of following more than 200 precepts, a novice has to follow only 10. Nowadays people who want to learn more about Buddhism, but cannot commit as much as a monk, can become novices.

“You learn to have more self-discipline,” said Delgado of his time as a novice.

And Chariyasuwan said for now he plans to be a monk for the next three months.

But, he added, in the end of that time he may decide to stay for longer.

“You have to have a strong faith to be a monk,” he said. “It was the right time for me to commit and to give the good deed and the positive energy.”