Buddhist temple thrives in the heart of Montrose

Houston, TX (USA) -- You'd be forgiven if, driving past Dawn Mountain, you thought it was a creatively named architecture firm. Though it's housed in a neat brick building on busy Richmond Avenue near South Shepherd, it's a Tibetan Buddhist temple and community center. 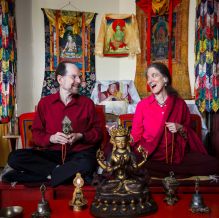 << Dawn Mountain founders Harvey Aronson and Anne Klein say a sense of joy and hope are central to Buddhism.

Founded in 1996, Dawn Mountain is the creation of Anne Klein, a professor of religious studies at Rice University, and her husband, Harvey Aronson, a therapist, and it is the outcome of an unlikely life journey for a girl from Albany, N.Y., and a boy from Brooklyn.

If you are sitting and sipping tea with the pair, surrounded by brightly colored paintings and statues and wall hangings, it's impossible not to think: These are two of the most serene people you'll ever meet.

For Klein, the story began in college on a semester abroad in France, when she had a sudden, inexplicable desire to travel to India. "I knew nothing about Buddhism or graduate school," she says, but decided a Ph.D. program in Buddhism at the University of Wisconsin was her best ticket to India.

There she met Aronson, who was also in the doctoral program. And she discovered the intricacies of Buddhism. "I was astounded at how sophisticated it was," she says.

The pair traveled to India, "and I just fell in love with the whole thing - the great open-hearted and mystery-oriented nature of it," Klein says.

One of Aronson's earliest influences was Richard Alpert, later known as Baba Ram Dass. "Going all the way back, Richard Alpert said we are all mired in repetitive behavior that obstructs our spiritual nature," he says. Becoming aware of those patterns, through practice and guidance, begins the process of becoming free of them and allows love, peace, joy and kindness to emerge. "There really is a kind of deeper possibility for human nature," he says.

Americans are plagued with self-hatred, but one of the teachings of Buddhism is that a person should have "a good dollop of compassion for myself and others," Aronson says.

Central to their teachings is the concept of mindfulness, or being absolutely in touch with the present moment. If you are mindful, you can recognize negative thoughts as just what they are: thoughts.

The process isn't easy, and it requires a commitment to a lifetime of learning. (Both Klein and Aronson still have teachers they rely on. So does the Dalai Lama.) Klein likens it to digging for gold in the ground. The gold is there, even if you can't see it, even if you have to get dirty and do a lot of digging to find it. Everyone has a perfect space within.

Houston is a tough place to be a Buddhist. "It's a very success-oriented city, where more money means more satisfaction," Aronson says. Except that, in the end, it doesn't.

He acknowledges that some of this introspection can sound a bit like therapy. "Buddhism is very, very early cognitive therapy," he says, but with a vision that is vast and deep, and with a spiritual dimension therapy can't touch.

The pair are open about their belief in reincarnation, which Buddhism shares with Hinduism. But they are perhaps a bit more reticent about discussing what they may know about their own past lives. It's a personal question, after all. These are not flighty movie stars who think they were once Nefertiti.

Also central to their practice is meditation. (Guided meditation is offered 11 a.m. to noon Sundays, and "Teaching Tuesdays" are 7 to 9 p.m. the first and third Tuesdays of the month. There's a welcome event at 10 a.m. Oct. 7.)

Meditation may seem like a difficult skill to develop, but the key is to start to try, even if you're very bad at it at first and your thoughts fly all over the place. "You don't sit down at a piano and play Mozart right off," Klein says.

The name of the temple, Dawn Mountain, was chosen with great care. First, they decided they wanted an American name. "Dawn" is a key word in Buddhism, and "mountain" seemed to balance it out nicely. It was also the name of the daughter of their friend Dr. Gail Gross, who had died the first year the couple was in Houston. "We wanted a sense of balance, groundedness, spaciousness," Klein says. "And light," says Aronson, finishing her sentence in the great tradition of married couples everywhere.

But most of all, they want to convey the overriding sense of joy and hope that are central to Buddhism. "The Buddhist nature has an intrinsic quality of joy," Klein says. "The pain you have is not all you are."