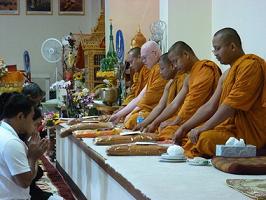 << Buddhist monks from throughout the Southeast gathered to mourn after the May 11 murder of the Rev. Chaiwat Moleechate, head monk of Wat Buddharaksa Temple, the Buddhist temple in Grand Bay. Four months later, the community is seeking a head monk to take over leadership at the Buddhist temple. The people "feel lost," says Visanou Khamphouy, head of the congregation, who's in charge of seeking a new spiritual master for the temple. Roy Hoffman/Press-Register

At his store this week, Khamphouy, 63, remembered with enduring admiration — and continuing sadness — how his spiritual master, whose death last spring has been blamed on a fellow monk, had said prayers, sprinkled holy water, and brought gold foil for good fortune.

"He was very smart, a great teacher," said Khamphouy, at the store counter near pieces of the foil pinned to the wall above a small Buddhist shrine.

"When you went to the monk you got answers for your problems," he said.

As president of the Buddhist temple, Khamphouy is in charge of finding a new head monk.

Given Moleechate’s enormous role in the community — and the violent circumstances of his death — that task is a daunting. It is pressing, too.

Without their monk, Khamphouy said, "the people feel lost."

Moleechate, 45, was bludgeoned to death inside the temple on May 11, according to news reports. Vern Phdsamay, 32, a monk who lived at the temple, was arrested and charged with murder in the slaying.

During a bail hearing on May 20, Mobile Assistant District Attorney Jo Beth Murphree said Phdsamay had struck Moleechate several times in the head with a large wooden pestle. An argument about food, Murphree said, had apparently set off the incident.

At the time, Phdsamay’s attorney, Neil Hanley, said the accusations against the defendant were out of character.

At his store, Khamphouy described Moleechate as a deeply philosophical man with a big heart.

"He helped many people," Khamphouy said of the late monk.

Moleechate assisted the 300 families of his community, helping them translate from Thai and Laotion to English, with family concerns, with questions about immigration.

In the aftermath of hurricanes Katrina and Ivan, Moleechate opened the temple as a shelter. And after the Gulf oil spill, Moleechate helped bring the community together, he said.

He took care of his assistant monks, too.

Once, when Phdsamay had suffered an ear ailment and had to go to Birmingham for treatment, Moleechate accompanied him, Khamphouy recalled.

In an interview at the temple with the Press-Register in May 2010, Moleechate said that he had grown up in a poor family near the border with Laos and began his religious studies at age 12.

He spoke of the Buddha as a model of perfection, a way of life and thought.

"We try to lead the Buddhist people to meditate," he said. "To cool down, to slow down. The clear mind. The pure mind."

Khamphouy described the monk accused of killing Moleechate as quite the opposite — having a troubled mind.

Moleechate had been aware of it, he said, even arranging for Phdsamay to see a psychologist.

Khamphouy has already located two monks who he thinks might work well in the south Mobile County community — one in California, another in Florida.

They must be of a high station in terms of experience and knowledge.

"We listen to what he says when he preaches," he said.

Once a monk is nominated as leader, a vote by the board is held.

Whoever is chosen will take up residence at the temple on Boe Road in Grand Bay, opened in 2010 after a fire gutted an earlier structure in Irvington.

A golden Buddha stands before the temple. Inside, figures of the Buddha fill an altar.

Khamphouy said that half of Moleechate’s ashes are at the temple; the other half were sent to Thailand.

On a recent day at the complex, one of Moleechate’s assistant monks, the Rev. Sisavath, walked across the grounds from the monk’s house to the temple.

Barefoot, in saffron robes, he stepped inside.

Sisavath has been with Wat Buddaraksa Temple for five years, and still speaks little English.

When asked about his lost monk, he nodded on hearing the name Chaiwat Moleechate.

He touched his chest.