Knoxville, TN (USA) -- On Friday, Ajahn Punnadhammo, a Canadian monk, will give a lecture in the McClung Museum Auditorium at 2:30 p.m. 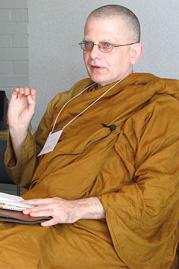 Punnadhammo, the resident monk of a Canadian monastery, will deliver a lecture entitled, "The Buddhist Worldview and Its Relation to Practice," in conjunction with the current exhibit in place in the McClung Museum, "Zen Buddhism and the Arts of Japan."

Buddhist practice refers to meditation and the various states of consciousness that can be achieved through such meditation.

Punnadhammo is the resident bhikkhu of Arrow River Forest Hermitage of the Thai Forest Tradition, located in Northern Ontario, and is currently working on a book about Buddhist cosmology with an emphasis on the Buddhist worldview as present in the Pali Canon, the earliest Buddhist scripture.

"I will briefly outline the early Buddhist concept of the universe as divided into hierarchically stacked realms, and then show how this view informs and underlies the Buddhist practices of ethics and meditation," Punnadhammo said.

He also believes that his lecture will help build a better understanding of Buddhism and its beliefs.

"In my view, Buddhist cosmology is a fascinating mythological structure that has been hitherto mostly ignored in the western world," Punnadhammo said. "A familiarity with the mythical universe of early Buddhist would help to round out people's understanding of Buddhism and illustrate many theoretical and practical aspects in a symbolic way."

Dr. Brian Carniello, professor in history at UT and organizer of the lecture, sees it as a way for students to better understand a different worldview.

"As an instructor of world civilization for four years at (UT), I am excited about this opportunity for students to learn about a worldview that has been important to many people around the world and that can be an interesting comparison to other worldviews," Carniello said.

"This talk," he said, "will relate to Buddhist practice in the sense that developing a boundless mind means recollecting the full range of possibilities for happiness and unhappiness, many of which are beyond the experiences with which human beings are most commonly in contact, i.e. the experiences of the human and animal realms."

The Losel Shedrup Ling of Knoxville (LSLK), the UT Department of History and the McClung Museum are sponsoring the lecture, which will last approximately one hour and will be followed by a brief question and answer session with Punnadhammo.

The event is free and open to the public. Attendees who plan on driving and parking at the event should request a two-hour parking permit from the attendant at the entrance to Circle Park for the event.

For those who may be interested, Punnadhammo and the LSLK will also be having a retreat that will be open to the public this weekend with an emphasis on meditation practices, the techniques of which can be useful to people of all faiths, beliefs and worldviews.