Knoxville, Tennessee -- (USA)Walking into the shrine room of Losel Shedrup Ling of Knoxville, a Tibetan Buddhist center, is something of a contradiction. It’s situated in a small, gray-colored building of professional suites on Kingston Pike. 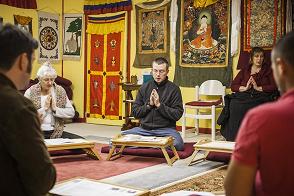 But inside, the carpet covering the entire room is bright red, the altar at the end of the room is covered in symbolic offerings, the pillows up against the wall are jewel-toned, and the portraits of spiritual figures around the room are painted in all different colors. The space is quiet, and the two men in the room are calm, even though one is trying to soothe a fussy baby.

Jim Conant and Brian Carniello are board members of the Buddhist center, and are sitting quietly against the wall in chairs on the opposite end of the room from the altar. Essentially, that’s what Buddhism is about: finding a peaceful and enlightened state of mind.

Conant follows a Tibetan Buddhist tradition (as does the most famous Buddhist in the world, the Dalai Lama), which is the form of Buddhism on which the center was founded in 1993. Tibetan Buddhism is mostly practiced by people who live in Tibet, Nepal, Bhutan, and North India, and to a lesser extent in Northeast China, Mongolia, and parts of Russia. Conant found a teacher who practiced Tibetan Buddhism, and discovered that practicing it worked well for him.

“I had a lot of emotional problems that I wasn’t able to deal with and I felt like I needed an answer,” says Conant, who grew up in a Christian household. “I was kind of open to exploring new things, and I came across Buddhism, and I was immediately attracted to it because of its emphasis on compassion and its very all-inclusive type of compassion. Nobody excluded. I just thought that it was right.”

Carniello, on the other hand, came to Buddhism just a couple of years ago after spending a lot of time in the Catholic church (and living for three years in Italy). He’s a professor at the University of Tennessee who studies European Medieval history, which is rooted in Catholicism. By way of a world civilization class he taught, he studied Buddhism more than he ever had before and decided the practices suited his life.

“The teachings themselves that I found useful were the idea of keeping life simple, to calm my mind in order to investigate all phenomena, including the phenomena of my own mind,” Carniello says.

Siddharta Gautama, the man whose teachings became Buddhism, is believed to have been born sometime between 411 and 400 B.C., and the most popular version of his biography refers to him as a Hindu prince kept sheltered in his palace by his father. When curiosity got the better of him, Conant explains, he left the palace to meet his subjects. As he met more and more people suffering and struggling, he became less interested in remaining in his palace, and left it to begin his life’s quest of seeking enlightenment.

The Buddha’s teachings spread throughout India, and up to Central Asia. It reached as far west as the Mediterranean Sea, and then east to China, Japan, Korea, and Southeast Asia. Each region practices its own traditions of Buddhism, which have inevitably evolved over time. But the goal is the same in each tradition: nirvana, or the state of highest happiness and enlightenment.

It’s said that the Buddha taught 84,000 different lessons that were directed at 84,000 states of mind people can have. Conant notes that some of the lessons contradict others. But, he says, each lesson was aimed at a unique quandary.

“They’re all tools to get you to a better state of mind. It’s like [there are] successive levels of understanding, and the ultimate level you’re shooting for is enlightenment, and that state is said to be totally nonconceptual, so at that point, there are no more concepts. They were sort of a way to get you to the goal, but once you’re at the goal, they’re no longer necessary.” Conant says.

When Carniello first came to the center, there was a lot he didn’t understand, like the Tibetan chants in which Conant participates. So Carniello continued to study the religion. He came across the website of a Buddhist teacher in Canada, whose teachings in the Theravada tradition of Buddhism appealed to him. Theravada Buddhism is thought to be the tradition originally practiced by the Buddha in southern India.

“Theravada emphasizes more the removing of obstacles, to see what’s beneath, to see what’s behind, to see what’s really there. It doesn’t emphasize as much rituals,” Carniello says. “[But] I think that Buddhism, rather than saying there’s a one-size-fits-all belief, would say that there are different views that can help different people with different points toward something that is spiritually beneficial.”

There’s also an inherent mysticism in Buddhism. Buddhists generally believe in karma, which is good energy accumulated over every lifetime that can either promote a soul to a better realm or demote it to a lower realm when the soul is reincarnated. Carniello says Buddhists believe there are heavenly realms and hellish realms, much like the Christian concepts of heaven and hell.

“It sounds totally bizarre,” Conant admits. “I was against the supernatural at first, but I found that being open and accepting is easier than fully rejecting it. I don’t fully believe it in my heart, but I’m open to it.”

Carniello agrees and says considering beliefs that he doesn’t necessarily agree with 100 percent allows him to develop more compassion towards others and their beliefs and expand his own spiritual experience. “Even just thinking in these terms, you don’t actually have to believe in them strictly,” he says, pointing out the find-what-works nature of the religion. Meditation also plays a role in Conant’s practice of Buddhism, though he says it’s not at all about emptying the mind and sitting stock-still for hours on end all the time.

“In different Buddhist traditions there’s a different emphasis on how much you want the thoughts to disappear sort of naturally over time,” Conant says. “You can go to very deep absorption states where you’re concentrating on the tip of your nose, and that’s essentially the only sensation in your consciousness, the sensation of the breath on your nose. In the Tibetan tradition, you’re very open to the outside world, you’re very open to the environment, you’re very open to sensations. And the thing is, you want them to pass through your consciousness without attaching to them, without grabbing them, so just letting them arise naturally and then disappear.”

But the main day-to-day application of this goal to reach enlightenment is simply mindfulness.

“Buddhism is all about mind training and controlling your mind. When I can remember to be mindful throughout the day, I’m applying it. I’ve already noticed a change in the many years I’ve been practicing Buddhism. Things don’t bother me as much,” Conant says.

Carniello points out that Buddhism doesn’t encourage repression of feelings, it teaches to let these negative emotions flow right through the consciousness, acknowledging they’re bad for your state of mind.

And perhaps it’s that sense of peace and acceptance that appeals to others, even if they’re not Buddhists.

“There’s actually a general level of respect toward Buddhism. It’s a religion that has a very positive public perception,” Conant says.

Carniello, too, has had few run-ins with anyone who had a problem with his beliefs. “With a few exceptions, my experience in Knoxville has been positive,” he says.

Like pretty much every other religion, Buddhists say prayers and listen to sermons. Conant goes to the shrine room on Sundays to say prayers and listen to a recorded lesson since the center doesn’t have an official teacher at the moment. There have been leaders, called geshes, at the center intermittently, and the board is currently looking for another geshe to teach Tibetan Buddhist practices. But unlike Christian prayers, which usually involve asking for specific things, Conant says Buddhist prayers simply ask for the Buddha’s blessings.

“You’re asking for his blessing and he sort of radiates it toward you,” Conant says.

At the end of what’s called the Seven Branch prayer, Conant says, it states “Everything I’ve done here, may it go toward all sentient beings,” which dedicates the merit or karma one acquires during the prayer to all living beings in the world.

Both Conant and Carniello say that people of any religion can apply Buddhism or Buddhist practices to their lives.

“We have several people here who consider themselves Christians, or part Christian, part Buddhist,” Conant says. “There’s nothing in Buddhism that says you can’t also follow another religion. That doesn’t mean you can’t also respect teachings from another tradition. A lot of Buddhist techniques, like meditation—and there’s lots of other techniques for dealing with emotions ... are useful to everybody, not just Buddhists.”

“There is absolutely no reason within Buddhism...to disrespect anyone’s beliefs. You hope it brings them happiness and are actually appreciative of whatever happiness they’ve achieved,” Carniello adds.

Conant boils the religion down to this: “It’s about how to deal with the world more skillfully.”