Nashville, Tennessee (USA) -- It's all fun and games until the bell rings, as Against the Stream Nashville founder and meditation teacher David Smith would say. Prior to propping himself on the cushion promptly at 7 p.m., at a spiritual center housed in an eerily beautiful old restaurant-equipment facility on Charlotte Pike, Smith is just one among several cronies participating in a raucous scene of chatter and bear hugs that would burst any newcomer's bubbles of Buddhist preconceptions. 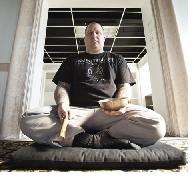 Maybe punk Buddhism sounds like a contradiction in terms. Yet despite Smith's shaved head, tattoo sleeves and affinity for the F-bomb, he has found a path to enlightenment that places its own rough-hewn spin on the Enlightened One's 2,500-year-old doctrines. It's affiliated with the Santa Monica and Los Angeles centers founded by spiritual teacher and Dharma Punx author Noah Levine, who visits Nashville 7 p.m. Friday as a fundraiser for Smith's local outpost.

Teaching mindfulness meditation four times weekly at his Sylvan Park center, Smith encourages his students — some of whom, like him, have histories of addiction — to explore their inner horizons instead of checking out through a cocktail, Klonopin, or cruising the Internet.

"You go sit in a room full of people and do some breathing and you feel better," Smith says. " 'This feels almost familiar' is what a lot of people say."

While the Nashville area has a number of established Buddhist organizations (like the Nashville Zen Center, founded in 1982), Smith's unorthodox lectures — coupled with events like Levine's first Nashville appearance this weekend — suggest that the city's spiritual life is taking on new complexity. An offshoot of Levine's California-based Mind Body Awareness Project, his center is in essence a church for people typically turned off by churches, or by the very idea of following.

"Dave looks like he could teach you as much about how to survive a mosh pit as he could about how to cultivate compassion and mindfulness," says Jeff Browning, an alcohol and drug counselor who works as an instructor with Mind Body Awareness Project. "That's what people respond to when they meet him. When we take meditations into the jails, those guys don't want to be preached at for the thousandth time, they want to hear about somebody who understands suffering and has a way out of that suffering."

First introduced to Buddhism by the family of Emotional Intelligence author Daniel Goleman, Smith divided his teenage years in western Massachusetts between retreats at the Insight Meditation Society and a street-punk lifestyle of drugs and debauchery.

"I didn't know what they were doing up there, I just knew the place seemed pretty cool and that the people were friendly," Smith says. "And then I got in this really bad car accident where my girlfriend was killed, and to cope with my PTSD I started doing mindfulness meditation."

Yet Smith acknowledges that at the same time he was still doing drugs. "It was just a big mess," he says. Seeking out recovery at the age of 28, Smith renounced his full-time music career and his hardcore excesses to start his own construction business and delve back into the study of Buddhism. While attending a three-month meditation retreat, he first heard about Levine's 2003 memoir Dharma Punx and found the book paralleled his own sex-drugs-and-rock-'n'-roll past.

Relating to Levine's rebellion against his spiritual roots — his father is famed poet and author Stephen Levine, one of the pioneers to popularize Theravada Buddhism in the West — Smith struck up an email correspondence with him. The more they communicated, the more the two saw they shared a desire to redirect their arrested-adolescent angst into a journey "against the stream" — a struggle to cultivate compassion for their faults.

Opting to follow in Levine's footsteps, Smith signed up for the teacher's San Francisco-based Meditation Instructor program. He met with Levine five times over the course of a year for guidance in how to facilitate his own group.

Inspired to share the serenity derived from his practice and dedication to the Four Noble Truths — the creed that essentially suffering is inevitable, and it is actually our resistance to unpleasant emotions that causes us pain — Smith sought out a prospective center where he could conduct his own teachings on "more of a street rather than college level." Approached by Smith in early 2011, the founder of 12South's One Dharma Nashville, Lisa Ernst, agreed to let him teach his Sunday-night guided-meditation class at their facility.

"Against the Stream is a very friendly place to begin a meditation practice for people of all backgrounds, as well as those who are interested in developing a practice and studying Buddhism more in depth," Ernst says. "I respect Dave's sincerity and commitment to his own practice, as the best teachers are those who never stop studying and have the most to give."

Despite Against the Stream's popularity on the West Coast, where the L.A. and Santa Monica centers attract nearly 1,800 visitors per week, Smith's arduous first year of no-show nights and skeptical attendees told him Nashville wouldn't be a pushover. But from his work with the Mind Body Awareness Project, for whom he currently teaches meditation to incarcerated youth, Smith says he's grown accustomed to tough audiences. Eventually he attracted a loyal crew intrigued by his standup-worthy witticism and no-bullshit Buddhist wisdom. Among his adherents is Belmont University student Luke Mayton, one of Smith's first pupils and an occasional substitute for his Wednesday night class.

"I had been interested in Buddhism since I was a kid and had been meditating on and off over the years in a very unorganized and unguided way without a teacher or community to support my practice," Mayton says. "When I attended Against the Stream for the first time, I knew it was something I would come back to many times. The group is approachable, laid-back and has a come-as-you-are feel that's always made me totally comfortable with being myself."

Confident that meditation's psychologically proven benefits will appeal to an overworked and saturated society, Smith believes Buddhism's fluid "question everything" philosophy will universally appeal to both New Age and ex-children-of-the-church crowds. Currently attracting between 150 and 200 people per week, Smith plans for a series of sliding-scale workshops (for instance, the upcoming Saturday Morning Series will deliver a diagram and historical detail-driven study of Buddhism) to finance the center, which like the entire ATS umbrella is nonprofit-certified and relies 100 percent upon attendee donations. Eagerly anticipating Levine's sanction of approval for the country's third official center, which coincidentally aligns with the group's fifth anniversary, Smith admits how surreal it seems to be at the forefront of the Southern division of Levine's burgeoning Buddhist movement.

"I remember being on retreats and watching the Dharma teacher and thinking, 'I wanna do that,' " Smith says. "It was always something I wanted to do at some point, but when I was like 60. When I was old and shit and couldn't play rock 'n' roll music anymore, maybe then I would teach. Never did I think it would happen this quick."