Louisville, Kentucky (USA) -- The Dalai Lama’s second day in Louisville started on a solemn and contemplative note as he began two sessions of teachings at the KFC Yum! Center on Monday morning. 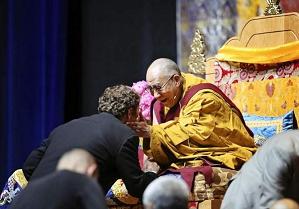 << Michael Fitzpatrick got a blessing from His Holiness the 14th Dalai Lama at the KFC Yum! Center. May 20th, 2013 Kylene White The Courier-Journal

The spiritual leader of Tibetan Buddhists sat cross-legged on a custom-made throne, indicating his status as teacher, beneath a large tapestry illustrating the Buddha and other sacred figures.

Whereas Sunday’s gathering at the Yum! Center had more of a celebratory feel and involved a general call for people of all faiths to work toward compassion and peace, Monday’s gathering was quieter and had a more specific focus on Buddhism.

The Dalai Lama mixed in laughter and simple lessons along with more in-depth instruction on Buddhist concepts of enlightenment and techniques of meditation. He spoke at times through a translator and at others in his own broken English.

“So, now completed,” he said at the end of two long sessions, during which fatigue began to show on some audience members’ faces but not on that of the 77-year-old Dalai Lama.

“I am hopeful not very tired.”

While his direct spiritual authority extends only to Tibetan Buddhism - just one branch among many in the religion - his talk drew many from other ethnic and philosophical traditions.

Representatives of Chinese, Thai, Vietnamese and other branches were on stage.

David Nguyen of California was particularly impressed that a religious leader would be so tolerant of other religions, “how they all get the point across but through different methods.

Magnolia Grove Monastery in Mississippi, home to monks and nuns following in the tradition of Vietnamese Buddhist teacher and author Thich Nhat Hanh, sent a vanload of residents on the seven-hour trip to Louisville.

Abbot Billy Hoang said the Dalai Lama’s talk encouraged the group in its goal to “bring mindfulness and peace for everyone.”

The title of the Dalai Lama’s talk was “Atisha’s Lamp for the Path to Enlightenment,” a teaching dating back to Tibet.

But before delving into the topic, the Dalai Lama spoke more generally on religion and spirituality, saying people who seek material riches can never be satisfied because they “always want more.”

He said any guest to a family’s home can sense if there is affection, making it an enjoyable visit even if the family is poor and has little food to offer. And a rich home “cannot produce affection, even if a lot of decoration,” he said.

Religions have varying views on such things as whether there is a divine creator, but they share the “same aim, same purpose, to stimulate the practice of love, compassion.”

He said he tells audiences in countries that are not traditionally Buddhist that he discourages people from converting to Buddhism, saying it can “create more problems, more confusion. Better to keep one’s own tradition.”

He said non-Buddhists should take from his talk any lessons that help them grow in compassion, and he urged Buddhists to keep striving in their spiritual practices.“Through familiarization, gradually it become easier,” he said.