Savannah, Georgia (USA) -- More than 1,000 people watched silently Sunday afternoon as eight Tibetan Buddhist monks of the Drepung Loseling Monastery chanted in prayer in front of the brightly colored sand mandala painting they spent days constructing inside the Jepson Center. Then, after the toss of a flower, the ceremony was brought to a close as one of the monks circled the ornate tabletop work of art, sweeping it inward until it was a pile of colored sand. 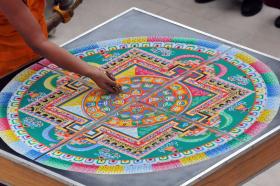 << Richard Burkhart/Savannah Morning News A monk carefully begins the process of deconstructing the sand mandala, which was created during the week by Tibetan Buddhist monks of Drepung Loseling Monastery during a special closing ceremony Sunday afternoon at the Jepson Center.

The deconstruction symbolizes the impermanence of all living things.

"We do the invocation ceremony to invoke the spiritual power within oneself and for the audience," said Gala Rinpoche, the group's head teacher, after the event concluded. "Then from there, we generally try to cultivate the sense of fulfillment, the sense of benefit for others, then we generate the great compassion."

After the ceremony concluded, the monks offered small packets of the colored sand to audience members as keepsakes.

The monks then took the remaining sand and marched - with a couple hundred Savannahians in tow - to River Street, where they performed another ceremony and released the sand into the Savannah River.

"After working for a few days, we believe the sand carries immense positive energy and healing power, and the best way to share it with the world is pouring (it into) water," Gala said. "It will carry the energy through the ocean, benefitting countless living beings - sentient beings - in the ocean and then, through evaporation, through the rain, it will spread all over the world."

This week was the first time the monks have come to Savannah to create a sand mandala painting in more than four years. The event is always popular, and preliminary counts at the entrances Sunday afternoon indicated 1,085 attended the closing ceremony. That's not counting the people who watched from outside the Jepson's glass walls once it became too crowded to allow more occupants inside.

Harry DeLorme, senior curator of education at the Telfair Museums, said this year's residency of the monks may have been the most popular yet.

"This is one of our most requested programs we've ever offered at the Jepson Center," he said. "It really strikes a chord with such a wide variety of people, and there are so many ways that people can appreciate what the monks do. Whether it's on an artistic level, whether it's on a spiritual level, a cultural level, there are so many ways people respond to this. It's become sort of just an incredibly resonant event for a lot of folks."

Local artist Chris Johnson, 26, said he came away from the free ceremony feeling that he had a new cultural experience.

"I'm glad that this is in Savannah," he said. "I'm glad that there was a turnout like it was â€” all these people trying to get an awareness about their history and know the mandalas and understanding their meaning. It's cool to see that many people involved."

The Telfair Museums' chief executive said she was moved by the experience.

"The whole process of seeing the art evolve over the week â€” that was incredible, watching the monks bit by bit all week," said director/CEO Lisa Grove. "But I was not expecting how special the closing ceremony was going to feel, the way we had all I guess grown so attached to it and then the act of them destroying it â€” how emotional that felt. It was really touching. The message that they provided, which was that nothing is permanent, I think it is a lovely, symbolic way to tell that message."

Gala said that while he's used to traveling to plenty of cities across the world for the artistic residencies, some of them big, he found Savannah to be a very spiritual place. Throughout the week, he said, people of all ages would come to the Jepson and ask the monks questions about their culture and religion while they were working on the sand mandala painting.

"I feel it's very spiritual. People came and just mediated," he said. "... I see this more than in other cities. So that's why. And then, of course, I see people smile more and look more friendly."

The monks are headed to Atlanta next, where the Dalai Lama is set to visit Emory University and speak in public next week.

Go to www.savannahnow.com to watch video from Sunday's event and to hear monk Gala Rinpoche talk about the ceremony.