WHITE SETTLEMENT, Tex. (USA) -- People still gather nightly at the Buddhist temple here, slipping off their shoes and kneeling on the floor of what was once someone’s living room. Their chanting voices slip out the screen door into the muggy Texas night, like the misty sprays of water that keep the patio cool outside. 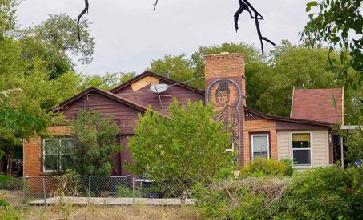 << Wat Busayadhammavanaram Meditation Center is where Aaron Alexis - a former Navy reservist and the man who killed 12 people Monday at the Washington Navy Yard - goes to meditate
Pic: Tim Sharp/Reuters

But there were frequent visitors and interruptions this week: reporters and photographers and F.B.I. agents, some of whom sat in their suits beneath the patio mist interviewing temple members.

Here, Aaron Alexis - Texas Buddhist, former Navy reservist and the man, the authorities say, who killed 12 people Monday at the Washington Navy Yard before being shot dead by the police - prayed and volunteered and lived when he rented the house behind the temple.

Mr. Alexis became an adopted member of White Settlement’s microscopic community of Thai immigrants - the temple has about 50 regular members - that has quietly and anonymously thrived in this working-class town west of Fort Worth in an area dominated by conservative Christians.

The shooting rampage at the navy yard shattered that anonymity and brought reporters and investigators in search of clues to Mr. Alexis’ life and motive.

The leader of the temple, Kasem Pundisto, a monk from Samut Songkhram, Thailand, said Mr. Alexis attended services and prayed regularly at the temple beginning in 2010, but more recently visited only occasionally. Mr. Alexis helped paint the decorative designs on a wooden gazebo-style structure in the parking lot, a place for members to socialize. Several months ago, he asked to borrow Mr. Pundisto’s vehicle because his own had broken down. Mr. Pundisto let him use it for days at a time.

Mr. Pundisto - who wears sandals and dark orange robes, has a shaved head and can speak only a few words of English - pointed to his vehicle. It was a black pickup truck, the Texas Everyman’s preferred mode of transportation. White Settlement’s Thai world is like that: It has an eclectic Texas quality.

The temple, a one-story house that was converted to a place of worship six years ago and filled with statues of Buddha and tigers, has a sign posted outside a door: “No alcohol, no firearm,” a warning to Texas Buddhists with state-issued licenses for concealed handguns.

At the nearby Thai restaurant called the Happy Bowl, the Bangkok-born owner - Nutpisit Suthamtewakul, 31, a friend of Mr. Alexis’ - has decorated his establishment with framed drawings and pictures of cats and butterflies and, atop one counter, Dallas Cowboys action figures.

Mr. Alexis lived in Fort Worth and White Settlement - where Thai immigrants first arrived in the 1990s, drawn by the cheap housing - off and on since 2010. Much of his world in White Settlement was contained in a few blocks: the Happy Bowl, the barber shop next to it, the temple and the house behind it that he rented from a member.

The temple, called Wat Busayadhammavanaram Meditation Center, has been reeling not only from the attention, but also from the shock of learning that someone who embraced the peaceful traditions of Buddhism had waged such violence.

Mr. Pundisto sat on the patio, sipping black coffee as Sam Gambir translated. Mr. Pundisto is a hands-on monk. When reporters arrived at the temple, he was using a leaf blower in the parking lot. Later, he dragged a heavy jack through the dirt to a tool shed. But the spiritual world remains his focus.

“His duty is to serve Buddha,” Mr. Gambir said of Mr. Pundisto.

Mr. Gambir, 47, of White Settlement, also Thai and the owner of two gas stations, had met Mr. Alexis at the temple. He said many of the regular temple members own Thai restaurants, dry cleaners or other small businesses in the area. Mr. Suthamtewakul still visits the temple, but he converted to Christianity after arriving in Texas, and his wife, Kristi, is also Christian. Mr. Gambir said he considers himself a Dallas Cowboys fan, and enjoys listening to country music.

“I do love Texas very much,” he said. “But I want to be honest. I don’t like the summer here because it’s real, real bad heat.”

White Settlement is a town of 16,000. Its name dates to the 1850s, when white settlers considered the area hostile Indian territory. Thai immigrants here have barely registered in census data. Census figures categorize those of Thai descent in White Settlement as “other Asians.”

On the night the F.B.I. agents conducted interviews, a few dozen temple members prayed for Mr. Alexis. They did not mention his name. Had he done something honorable for the community, Mr. Gambir said, they would have done so.