BIRMINGHAM, Alabama (USA) -- The 14th Dalai Lama’s first visit to Birmingham is still seven months away, but conversations have already begun concerning what it will mean for the City of Birmingham, ethics and science. 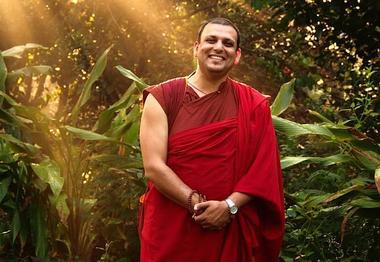 On Friday, April 4, the city will join UAB and the Massachusetts Institute of Technology for a dialogue on the history of civil rights in Birmingham, and how it relates to human rights efforts around the world. The guest speaker will be Ven. Tenzin Priyadarshi, who will lecture on his work as the founding director of the Dalai Lama Center for Ethics and Transformative Values at MIT, a collaborative, nonpartisan think tank devoted to inquiry, dialogue and education.

The center has six Nobel Laureates as founding members. Its programs, which range from science and technology to international relations, currently run in eight countries.

Priyadarshi was born into a Hindu family in Bihar, India, entered a monastery at age 10 and became a Buddhist monk, ordained by the Dalai Lama. He attended the Sanskrit University in Varanasi, India, and completed graduate studies at Harvard University. He was appointed the first Buddhist chaplain at MIT in 2002. Priyadarshi has been active in interfaith dialogues with religious figures such as Pope John Paul II, Pope Benedict XVI and Archbishop Desmond Tutu.

Following the 2005 Tsunami, he founded the Prajnopaya Foundation to develop innovative and sustainable ways to alleviate suffering in developing countries. In 2013, he was awarded a Distinguished Alumni Award from Harvard for his visionary contributions to humanity.

“The City of Birmingham has embraced its legacy of Civil Rights," said Birmingham Mayor William Bell. "The events that took place here in the 1960s impacted the world. We have a kindred connection to other cultures around the globe who continue to fight for basic human rights and alleviate human suffering. We are honored to host the Venerable Tenzin Priyadarshi as we prepare for the Dalai Lama’s visit in the fall.”

The Dalai Lama, the Tibetan Buddhist spiritual leader who fled his homeland for India in 1959 during the Tibetan uprising, is scheduled to visit Birmingham from Oct. 24-27. From Dharamsala, India, he has led the Tibetan government in exile and, at age 78, continues to travel the world with his message of compassion as the source of a happy life. He has been recognized for his contributions to peace, non-violence, human rights and religious understanding, winning the Nobel Peace Prize in 1989 and the United States Congressional Gold Medal in 2007. He was recently named by Fortune Magazine as one of the “World’s 50 Greatest Leaders.”