Buddhism in the Bible Belt

Birmingham, Alabama (USA) -- More than 488 million people world-wide practice Buddhism. In Birmingham practitioners make up only about six in 1,000, but many more people may find themselves wondering about this Eastern practice as the Dalai Lama heads to Birmingham Oct. 26. They're in luck; you don't have to become a Buddhist to benefit from the ancient teachings, says Tenzin Deshek. 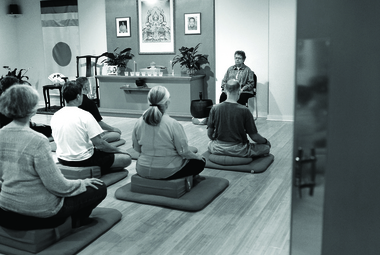 At Losel Maitri Tibetan Buddhist Center in Cahaba Heights, where Deshek is resident teacher and spiritual director, he provides instruction on Buddhist philosophy and practices. Deshek took monastic vows in 1968 at the Dalai Lama's monastery in Dharamsala, India. When discussing the benefits of Buddhism, Deshek echoes the sentiment often expressed by his spiritual leader. "In order to practice Buddhism there is no need to become Buddhist," Deshek says. "If you're not Buddhist, it doesn't matter,. You can use Buddhist methods to solve human problems and get a better, happier, more peaceful life."

Influenced by the teachers of Siddhartha Gautama, who became known as the Buddha more than 2,500 years ago, the Buddhist method encourages cultivating the mind by letting go of mental anguish and delusions through practices of mindfulness and meditation. These techniques are meant to quiet mental chatter and provide perspective and objectivity. At the heart of all Buddhist teachings is the desire to develop compassion for oneself and others. In the lessons he teaches at Losel Maitri, Deshek encourages discussion, especially of differing viewpoints. "Do not take my word for it," he says smiling. "Always question. Ask yourself if it is true."

Each week, an intimate group attends the center's services, book discussions and teachings. Most were raised within Judeo-Christian traditions and are interested in expanding their understanding of life through traditional Buddhist methods of inquisitiveness and logic.

Birmingham Shambala Center director of practice and education Janet Bronstein has taught meditation and mindfulness practices for decades. Like Deshek, she sees these Buddhist practices as a complement to other spiritual traditions. "There are so many applications for this simple practice," she says. "You sit still and get past the distractions of your typical mind so you can go deeper into what you already have, which is the theme of all meditation."

Elizabeth Mullins, a licensed clinical social worker, sees the therapeutic benefits of Buddhist meditation and mindfulness in her work with patients at her private practice at the Moore Institute in Cahaba Heights. She's also teaching secular-based meditation techniques at the Birmingham VA Medical Center as a form of pain management for those experiencing physical and mental suffering. She finds that by focusing on the pain, patients can actually diminish its effects.

"Learning to meditate and use mindfulness practice changes the nervous system and changes cortisol and stress levels," Mullins says. "Just being able to calm themselves down helps people a lot. It helps their self-esteem and confidence. They don't need fancy equipment. It gives them something they can sit there and do."

Mullins also sponsors the Birmingham 12-Step Sangha, a support group for those struggling with addiction. The group uses Buddhist philosophy and practices to increase awareness, calm the mind and provide insight into habitual patterns. Participants learn practical ways to let go of resentments and develop a deeper sense of compassion.

Although the 12-Step Sangha, Shambala Center and Losel Maitri have differing focuses of study, for practitioners of this ancient spiritual tradition, generating greater compassion is the common denominator.

"I believe all religions are about compassion," Bronstein says. "We have a fabulous heritage in the city and people with real spiritual convictions that have made a difference, and we going to continue to be part of the world community in that way."

-------
Brigid Elsken Galloway is a freelance journalist and Buddhist practitioner. She blogs about the Buddhist perspective at southernbuddhistcatholic.blogspot.com.