Charlotte, North Carolina (USA) -- Many Charlotteans have noticed the bright colors of the Charlotte True Buddhist Temple as they drive past it on Monroe Road but have never stopped to take a look inside. 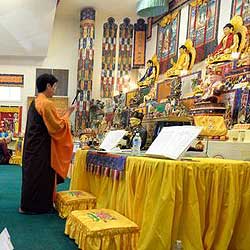 For those who come by, a visit starts by taking shoes off at the door. Then visitors enter a large, colorful room dominated by Buddha statues surrounded by offerings of fruit, flowers and tea.

Participants at Sunday services sit crossed-legged on cushions and chant prayers as chimes sound at intervals. All temple services are in Chinese, but there are some translations of various prayers and chants available.

“The fact that everything is in Chinese can challenge people a bit. The people, like at any temple and church, are very welcoming. People have to want to seriously practice Buddhism, and people here want to do that,” says Ted Hoeffler, a temple member. “It takes a lot of personal effort and contemplation.”

“Practicing Buddhism helps me keep peace of mind. It helps me clear my mind and heart. … I let the chimes take away my worries and don’t think about anything,” says Maggie Phan, who started attending the temple in September.

These Buddhists believe in fate, so do not proselytize. “The big reason Buddhists don’t do conversions is that they believe in fate and infinity. If it doesn’t work for you now, it’s just not your time yet,” says Melissa FanJiang, a temple member.

They also believe you may have been a member in a past life. “Buddhists believe joining isn’t an accident, that sometime in a previous life they practiced Buddhism, so when they practice Buddhism in a current life, it isn’t by coincidence,” Hoeffler says.

The temple is part of the True Buddha School sect, which originated in Taiwan and East Asia with influence from Sutrayana and Vajrayana (Tantric Buddhism) and Taoism. It was founded in the late 1980s, and leader Lu Sheng-Yen, referred to by his followers as Grand Master Lu, has written more than 200 books. More than 5 million people practice the True Buddha School, and there are more than 300 chapters worldwide.

The temple is active in the community and regularly donates money and canned goods to the Second Harvest food bank.

Temple founder: Pauline Lee, 67, the temple director and founder, was born in Canton, China, and raised in Hong Kong. After she met and married her Canadian husband in Hong Kong, they lived for a year in Canada before moving to Charlotte 49 years ago. Grand Master Lu selected Lee to be Charlotte’s True Buddhist Temple director.

“It makes me feel good to help others,” Lee says.

Weddings: In a Chinese Buddhist wedding, the bride wears a red dress because, Lee says, “It’s considered a happy color.” A wedding ceremony lasts about 20 minutes and includes blessing of holy water, the traditional exchanging of rings and drinking a cup of tea.

Education: Every Sunday after services, there is a lunch that everyone is welcome to attend. From 1:30 to 2:15 p.m., there is an English Dharma Study that Lee started to support interest and learning about Buddhism. FanJiang says, “It covers a variety of topics including basics such as ‘who’s Buddha?’ seven or eight chakras, what you should do during meditation, and learning the pattern of breathing in white light and breathing out black light.”

The temple was founded in 1991 and held services uptown until 2000 when it moved to 5909 Monroe Road. It’s one of nine Buddhist congregations in Mecklenburg County and one of 46 in North Carolina, according to city-data.com.

Language: All services are in Chinese. Some English translation is available in prayer books. Sunday afternoon English Dharma Study is open to the public.