Practitioners look for an inner peace, discipline, harmony with world

Hunstville, Alabama (USA) -- For Glen Adams, it was a movie. For Jeff Simson, it was a with-it teacher at his high school. And for Jim Gordon, it was a time of crisis in his marriage 17 years ago that propelled him into the self-help and spirituality sections of the bookstore to save the marriage and his own peace of mind. 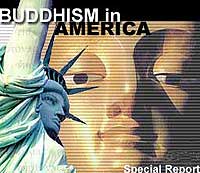 But once they'd stumbled across Buddhism, all three men were surprised to find a personal resonance with ancient traditions of meditation and philosophy.

Being Buddhist in America takes a certain amount of philosophical adventurousness - or desperation, Gordon says.

"You're not going to have a Buddhist coming to the door to proselytize," Gordon said Saturday as he discussed Buddhism in the garden zendo, a meditation room, behind his home on Green Mountain.

"People who come to Zen in the United States usually come through tortuous paths," he said. "They generally come through, if not crisis, a lot of introspection just because it is so foreign, so removed from mainstream society."

But Buddhism is becoming less foreign than it's ever been in the United States, even in the heart of the Bible Belt. Sponsored by Buddhists in Florence and Huntsville, Gen Kelsang Mondrub, a Buddhist monk based in Atlanta, will speak locally this weekend.

Mondrub comes because of requests, not because Buddhists have discovered an evangelical impulse, says Caroline Lopez, a leader in the Buddhist community in Florence.

"We are not trying to convert anyone into becoming a Buddhist," Lopez wrote in an e-mail about the Mondrub visit. "We are offering a path or opportunity for people who are interested to learn practical methods on how to develop lasting inner peace."

Adams, a deacon at First Presbyterian Church in Huntsville, incorporates Buddhist ideas and practices into his life as a Christian. Adams began reading more about Buddhism a few years ago after seeing the movie, "Seven Years in Tibet," based on the true story of a British pilot after World War II.

Adams helped sponsor the Interfaith Mission Service's Interfaith Dialogue series at the church for members to learn more about other religions. And his Sunday School group also did more studies on Buddhism.

"I don't see Buddhism as a threat to Christianity or that it undercuts Jesus' divinity," Adams said last week. "Buddhism emphasizes living fully in the moment. You can find the same sort of thing in the New Testament."

Adams said the daily practice of meditation, of attempting to keep his mind quiet and ready but emptied of his own thoughts for a while, has brought him tranquility and better mental discipline.

Buddhism, in fact, is not a religion, but a recognition of the interconnectedness of all life.

"The closest Buddhists get to a concept of God is something like Jung's cosmic consciousness, that we're all one," Gordon said.

"There are no prayers to anyone, no deity, no creator," said Simson, a Huntsville man who studied to be a Buddhist monk for several years and now works at an area veterinary office.

Simson said that during the '70s, only a few years after he first learned about Buddhism from a high school teacher, he was perhaps the only Buddhist at Auburn University. He said he experienced outright disdain for his beliefs then, but that now people seem to be more accepting of them, particularly in the relatively cosmopolitan atmosphere of Huntsville.

"Thank God for (Wernher) von Braun and the Germans!" Simson said. "Huntsville is more accepting of other people's ideas than other parts of Alabama."

Buddhism is so different from a god-centered religion that it's hard to explain, he said.

"Buddhism's driving force is to be here now and to contemplate life to be the best person possible," Simson said.

Gordon found in Buddhism a practical morality that seemed kinder than the judgmental fundamentalism of his mother. He found a reverence toward the mystery of life that seemed more complete than the atheism of his father but without conflicting with the science he studies and uses as a physicist. And the mental discipline of meditation helps him calm an active mind.

The bells, incense, mantras and postures used during meditation are simply ways to help each person find the Buddha, the awakened one, within, Gordon said. The bows to a little statue of Buddha or to the other members of the sangha, gathering, are to show humility before those elements in each person, not to worship each other or idols.

Often, Gordon said, people who come to Buddhism after rejecting the faiths of their childhood, find in Buddhism a peace with those faiths.

Buddhism teaches followers not to value attachments to possessions or people or even ideas, and to be respectful of every path people take.

"A lot come to Zen though Christian or Jewish traditions and therefore have rejected everything," Gordon said. "But the longer they sit (meditate), the more accepting they get. The goal is to live in harmony with other people - and dogs and cats and mosquitos - all those things that grow."