Charlotte, NC (USA) -- Charlotte is getting a second chance at a rare opportunity next week when the Heart Shrine Relics Tour comes to town. 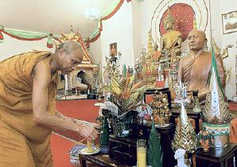 << Sandhasaro Singkham lights a candle in the Wat Lao temple in Charlotte, where relics of Venerable Sariputra, below, and other Buddhist masters will be on display through Sunday.
Photo by Laura Mueller, The Charlotte Observer

The tour features the relics of Buddhism's founder, known as the Historical Buddha, who lived more than 2,500 years ago, and those of Maudgalyayana, Ananda and Sariputra, as well as other Buddhist saints and spiritual masters from Tibetan, Chinese and Indian traditions.

Buddhist relics are not merely cremated bones; they are believed to be the manifestations of the spiritual realizations of Buddhist masters.

The pearllike and crystallike objects, known as ringsel, appear during a master's cremation as a sign that the master truly achieved enlightenment and spiritual purity and showed loving kindness to others, says Victoria Ewart, the tour manager based in Soquel, Calif.

The oldest relics in the tour actually predate the Historical Buddha. The most recent are from Ven Ribur Rinpoche, a master who died in January.

"It's not an ancient phenomenon," Ewart says. "It still happens today. In the Buddhist tradition, if a master has realizations, he doesn't talk about it. He's more humble in his approach. The ringsel are evidence of his realizations."

Relics will be enshrined in India

The Heart Shrine Relics Tour began in 2001 and made its first swing through Charlotte three years ago. It is organized by the Maitreya Project based in Kushinagar in northern India, where the Historical Buddha, also known as Shakyamuni, died at age 80.

The relics and Buddhist artifacts were donated by Buddhist masters, museums and monasteries around the world. When the tour ends, the relics will be permanently enshrined in a 500-foot statue of the Buddha to be built in Kushinagar. The $195 million statue and throne building will be the centerpiece of a $250 million complex that will include spiritual, educational and medical facilities for one of the poorest regions of India.

The tour gives the faithful and the curious around the world the opportunity to view the relics before they are sealed away forever. Tour participants may view a video and learn more about the practice of Buddhism. They also may take part in a Blessing Ceremony, during which the containers holding the relics are placed upon visitors' heads.

It is believed that anyone -- Buddhist or not -- in the presence of the relics may feel joy, peace, inspiration and loving kindness. Some may experience a spiritual transformation. There also have been testimonies of healings and visions after encounters with relics, and some people are overcome with emotion.

"We encourage people to be open-minded," Ewart says. "Not blind faith, but open-minded."

Buddhism is fundamentally a philosophy, a code of practice, a way of life that over time has evolved into one of the world's major religions. It was founded by the Historical Buddha, also known as Shakyamuni Buddha. He was born Siddhartha Gautama and was a prince in Nepal. Gautama gave up his wealth and privilege to undertake a spiritual sojourn to enlightenment.

Larry Galea is the Heart Shrine Relic Tour's local coordinator for Wat Lao Charlotte, the area's Buddhist temple. He says his first contact with Buddhism was probably when he was 10 or 11 years old. He is 58 now, and says that practicing Buddhism has shown him a true perspective of himself in relation to others. Everything is relative. Take everything on an even keel.

Buddha called it "The Middle Path," neither too much nor too little, but somewhere in between.

Galea says a common misunderstanding about Buddhism is the idea that its followers worship idols.

"That statue of Buddha is just a statue. Buddha is not a god. Buddha was a man," Galea says. "Statues are memorials of the founder of Buddhism. Bowing is paying respect to the founder and the ideas of Buddhism.

''If you visit Washington and there's a statue of Lincoln, you stare at Lincoln and you think about Lincoln and what he did for the country. But you're not worshipping Lincoln."

The Heart Shrine Relics Tour gives participants the opportunity to learn more and to understand another belief, Galea says. The actual presentation of the relics themselves is very beautiful and very informative. It's within the temple, a place of peace and well-being, he explains. Calming, relaxing music plays. It's an uplifting and powerful experience.

The philosophy of Buddhism is followed by people of many faiths, Galea says. "There are Catholic Buddhists, Lutheran Buddhists, Jewish Buddhists. It (the relic tour) gives people a chance to see what some of their fellow believers see in the practice of Buddhism.

----------------
WHAT: Heart Shrine Relics Tour The relics of the Historical Buddha as well as Maudgalyayana, Ananda and Sariputra and other saints and spiritual masters from the Chinese, Indian and Tibetan traditions.

COST: Free and open to the public.