Stafford, Texas (USA) -- The spread at Chung Mei Buddhist Temple in Stafford is bounteous and beautiful. Arrayed in the dining room are 10 traditional Chinese New Year's dishes, each with a lovely name (Infinity Pearl, Lotus Gathering) and even lovelier symbolism (the purity and wisdom of Buddha). 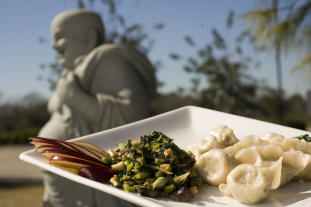 At my request, this resplendent feast was prepared before the dawning of the Year of the Pig, which begins Saturday at midnight.

"So this is what you'll be eating on New Year's Eve?" I ask the nuns.

Yes and no, which turns out to be the answer to many other questions, as well.

"You may (also) see us baking lasagne or serving spaghetti," says the Rev. Miao Hong, who has a shaved head and wears chocolate-brown robes.

But what about auspicious New Year's dishes? Superstitions about what to eat and avoid?

"We might order pizza. It'll be easier," she jokes, listing other freakishly untraditional food — guacamole, french fries — that could appear on temple tables that evening.

If such food brings the devotees joy, she says, why not?

Later, when she's unable to answer one of my questions, she offers to respond via fax after she gains enlightenment.

Good Luck Dumplings are de rigueur for the New Year, a celebration that stretches for 15 days. Longevity Dish, a soupy casserole made with bitter Chinese mustard greens and mushrooms, is also traditional; it symbolizes the sweeping away of the previous year's suffering and bitterness.

But other traditional New Year dishes may actually collide with Buddhist teachings. Wealthy Bean Curd, for example, is made from chunks of pineapple and blocks of braised tofu. It is eaten over the New Year holiday because the word for "pineapple" in the Taiwanese dialect sounds like the word for "accumulating wealth."

However, a single pineapple may cost a whopping $5, Hong points out. Temple monastics, who live off the kindness of strangers — in a word, donations — are trained to avoid extravagance. Also, better to save for a new temple than to spend on a pineapple. In that case, spaghetti and pizza could be on the menu at the 6-year-old Chung Mei, an all-women temple that is part of Fo Guang Shan, a Buddhist organization founded in Taiwan in 1967, with chapters around the world.

Custom continues
Buddhist temple cooking is a very old tradition. Centuries ago, Taiwanese monks lived on remote mountaintops; they couldn't beg for alms, as monks did elsewhere. Nor could they stop by the neighborhood cafe for a bite. They had to know how to feed themselves. Cooking — like many other daily chores — became a tangible way to practice Buddhism, offering lessons in compassion, sharing, gratitude, mindfulness and service.

Stories of Buddhist monks attaining enlightenment in the kitchen abound. In one, a group of practitioners goes on a retreat. Praying is hard work that requires plenty of nourishment, so they bring someone along to cook for them. The cook gains enlightenment before they do.

"In a monastery, the cook is a very important person," explains Alejandro Chaoul, a Buddhist with a Ph.D. from Rice University in Tibetan Buddhism.

"He spends most of the time in the kitchen, allowing others to spend more time at practice, so it's a big offering, a constant offering if you do it in the right way. As you are cooking, you are visualizing how this will be nurturing for the other practitioners. The practitioners are making prayers for all beings, so it's a contributing factor to their state of mind and the benefit of that prayer."

Cooking joyfully is one aspect of the "right way," according to Hong. A dish cooked by rote lacks "sincerity" and can't cheer those who eat it.

"You don't see the dish is smiling to you," she said.

The food at Chung Mei Temple is vegetarian, reflecting the central Buddhist tenet of compassion toward all sentient beings. In plain English, Buddhists may not kill for dinner. The food contains no onion or garlic — strong-smelling ingredients that, according to Buddhist belief, overstimulate and distract from meditation.

Hong says temple dishes are plain "because less seasoning means you can taste real vegetables. We used to add a lot of seasoning, but then you were eating seasonings, not the food itself."

`Chinese Advil'
Ginger, on the other hand, is used with abandon. Hong calls it "Chinese Advil." Every dish at Chung Mei Temple seems to start with a pile of neatly stacked fresh ginger batonnets in an enormous wok of sizzling oil.

The dishes that emerge from the kitchen are colorful, light, soothing and often surprising. Apple slices and dried blueberries float in a fruity tea, lotus buds "blossom" in a hotpot, sugar-cane juice appears as stock. If there is no sugar cane, the stock may be made from the juice of boiled-down pears, or something else entirely.

In fact, there are no recipes. "Our recipe is always in our head," says volunteer Wang Kuo Chu, patting his cranium for emphasis. He and his wife used to own a restaurant in Houston. Now retired, they volunteer to cook at the temple almost every day, guided by the abbess. They cook for the nuns, for visitors and dignitaries, for practitioners after twice-monthly chanting services and for celebrations.

Centuries ago, devotees trekked long and far to reach remote mountain-top temples. Simple courtesy prompted the monks to feed them before they embarked on the arduous journey home. Chung Mei Temple sits at the intersection of the Southwest Freeway and Beltway 8 — no mountaintops for miles — and presumably, practitioners arrive in automobiles. But the tradition of hospitality continues and evolves, as it does at many Buddhist temples in Houston.

Perhaps it will include pondering the Four Noble Truths over enchiladas and Infinity Pearl Rice Balls, ringing in the Chinese New Year with pizza capped by Eightfold Path Dessert. Whatever is on the menu, a devout Buddhist doesn't merely chow down. She thinks about the hard work that went into the planting, harvesting, polishing and bringing to market of each grain of rice; the insects that may have died in the process; the cook who transformed the raw grains into a tempting dish; the potter who made the serving bowl.

Said Chaoul: "(It's) thinking and thanking and feeling compassion for all that."
Recipes are a joy to sample

The cooks at Chung Mei Buddhist Temple don't use recipes, though at our request they kindly tried to write these down. We hope these dishes follow the spirit of their cooking, which is to say that we tried to make them with compassion, mindfulness and joy.

Soak the rolls in very hot water for about 30 minutes until they soften. To keep them submerged, you may need to weigh them down with a plate topped by a heavy can. Drain the rolls and gently squeeze dry.

Heat the oil over high heat in a wok. Add the ginger, and stir-fry 1 to 2 minutes until fragrant. Do not let it burn. Add the carrot and daikon, and stir-fry 3 to 5 minutes. Add the re-hydrated rolls and 2 cups water to the wok. Stir in the cinnamon, soy sauce, stock and salt to taste. Bring the liquid to a boil. Turn the heat to medium, and cook, covered, about 20 to 25 minutes until the vegetables are soft (but not mushy).