Unholy deed: When Nam Van Nguyen broke his vow of chastity, members of the Minh Dao Vietnamese Buddhist Temple filed suit to get him removed.

Norcross, Georgia (USA) -- The house of Buddha should be a place of serenity, harmony and renunciation of worldly ambitions. A Vietnamese Buddhist temple in Norcross has been anything but the past three years. 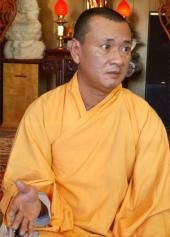 << Monk Nam Van Nguyen was forced out of his temple after a sexual affair.

The controversy started when the monk, who lived in the temple, admittedly broke his vows of chastity — with the wife of a temple member.

Monk Nam Van Nguyen said the woman crawled through an open window at the temple in the middle of the night to talk about marital problems and seduced him.

The woman's husband, Phuong Xuan Tran, says the monk was the seducer.

Either way, once the encounter became known, it divided the Minh Dao Vietnamese Buddhist Temple into anti-monk and pro-monk factions. The controversy led to separate prayer hours, allegations of temple-stealing, death threats and mountains of legal documents.

The court order was the result of a lawsuit that some members of his congregation filed against him. Now that he is gone, temple members say they can begin a nationwide search for a new leader of the temple.

Many temple members say they are dismayed by Nguyen's actions and worry that young Vietnamese who have grown up in the United States will get the wrong impression of Buddhist monks.

"He makes me ashamed of Vietnamese people," said Mai Le, a temple member originally from Saigon. "He's a bad monk."

In addition to their concerns over his tryst, opponents say the monk hasn't given satisfactory answers about temple finances.

After Nguyen's affair, temple members discovered the monk had registered the temple and another property in his own name rather than in the name of the nonprofit temple association. They say he took out a $100,000 equity loan on the property after the first mortgage was paid off.

Nam Van Nguyen, 49, who had lived in the temple about 10 years, says he used the equity loan for upkeep of the temple, to pay property taxes and to partially repay members who lent him money.

Though he complied with the decision by Gwinnett Superior Court Judge Dawson Jackson and left the temple, he is appealing the order. He's living with another monk in the meantime.

"I'm not sure what I'm going to do," Nguyen said last week. "If my friends don't have enough money to support me, I think I'll go to the homeless shelter and live there temporarily."

Nguyen admitted in 2003 to having had sex with the wife of temple member Tran. The monk said the sexual affair was a mistake, but the woman seduced him.

After the incident, Tran taped a phone call in which the monk and Tran's wife talked about the encounter. Tran then distributed the tape.

"Everybody knows they trapped me, " Nguyen said of the taping.

Tran says he made a tape recording of the conversation to prove the relationship. Tran took the recording to other Vietnamese Buddhist monks in metro Atlanta, hoping they would persuade Nguyen to leave, but it was to no avail.

Some temple members said no matter who was the seducer, the monk's actions were an offense to the faithful. He was supposed to be the "spiritual master," said Tri Duc Pham, a friend of Tran's and a party to the lawsuit. "It's the worst sin in Buddhism."

Most of the congregation turned against the monk when they learned of it. Tran, the husband, is now the head of the temple association.

Those who remained loyal to the monk say they've been harassed by his opponents. An incident caught on the temple's security camera last spring shows a feisty argument in which an elderly woman slaps monk supporter Minh Chau Nguyen in the face.

Minh Chau Nguyen, no relation to the monk or to Duac Nguyen, was trying to photograph the woman and her family as they rearranged tables and statues inside the temple, her lawyer Tran Lankford said.

The Gwinnett solicitor's office has filed a criminal charge of battery and disorderly conduct against the elderly woman involved in the incident.

Minh Chau Nguyen, a longtime temple member, is concerned about having a say in how the temple is run even though the monk is gone, Lankford said. She loaned as much as $60,000 to the temple on an honor basis — according to her affidavit in Gwinnett Superior Court.

Outside the temple last week, Helen Chan, 26, of Suwanee peered through the window, wondering when the house of worship would open.

"I stopped by because I wanted to pray for the good thing," Chan said.

The temple sports an array of tiny flags fluttering near the roof. A huge statue of the Buddhist goddess of compassion stands in the front yard, and several statues of Buddha sit inside.

Temple member Pham said he hopes a new leader can be found and worship will resume.

Tran welcomed a visiting monk from Indiana on Wednesday who will perform a special ceremony today to celebrate the first full moon after the Vietnamese New Year. Temple members aren't sure who will fill the monk's post permanently, but they are looking.

"You need to have a monk to function as a temple," Pham said. "Otherwise. it's just a house."