Port Arthur, Texas (USA) -- It’s not often one gets the chance to see 100-year-old trees that can fit on a desktop, shaolin monks display their prowess in martial arts and enough bamboo to stuff a dozen full grown pandas. This weekend, however, the Buu Mon Buddhist Temple is giving locals the opportunity to see them all in one location. 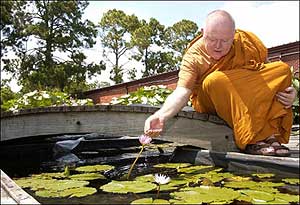 << Guiseppe Barranco/The News Nestled at the foot of a small bridge, The Rev. Kassapa attends to a flower in the gardens of the Buu Mon Temple. The temple is making preparation for its Ninth Annual Lotus tour which will begin on Saturday.

“Vesak looks at the birth, life and death of the Buddha,” The Rev. Kassapa said. “It celebrates all three events on one day and people get together with food, flowers and offerings.”

One early event gives attendees the opportunity to participate in an open panel with three Buddhist monks.

“On Saturday at 10 a.m. there will be a round table discussion in the main hall,” Kassapa said. “We’re going to have a discussion to talk about Buddhism from a western point of view.”

He said people will be able to participate in the discussion and ask any questions they have about the faith.

The main event for the Buddhist community will begin at 1:30 p.m. Sunday, when the celebration of Vesak begins.

“There will be around 150 monks for the actual Vesak celebration for a combination of chanting and prayer,” Kassapa said. “If you’ve ever heard 150 people chant at one time, it’s really pretty neat.”

Celebrating Vesak for Buddhists is comparable to celebrating Christmas in western culture, he added.

The tour will offer many traditional Buddhist activities, including martial art performances by shaolin masters, folk dancing and singing, and plenty of food varieties.

Kassapa said there will also be bonsai trees more than 100 years old on display at the tour.

Those who do not practice Buddhism are invited as well, regardless of religion.

“Everybody is always welcome,” he said. “We try to make you feel at home.”

Kassapa said they are willing to speak with anyone interested in learning about aspects of Buddhism.

“We just talk and answer questions honestly and truthfully,” he said. “If you’re really honest with people and really passionate about what you believe in, they can accept it or not accept it, but at least they won’t feel threatened.”