Prayers, chants lead the way on one life's journey

Buddhist monk The Venerable Thupten Ngodup is nearing the end of a two-month-long U.S. tour to raise money for a monastery in India.

Miami, FL (USA) -- The Medium was 27 floors up in a Sunny Isles Beach skyscraper, down a dark corridor and left of the giant stone elephant. He was conducting a memorial service in an all-white room with panoramic ocean views, Indian bas-relief sculptures carved on the walls and 30 people wearing natural fabrics who sat cross-legged on the floor. 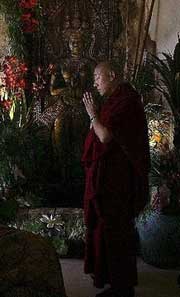 << CARL JUSTE/MIAMI HERALD STAFF
Buddhist monk The Venerable Thupten Ngodup is nearing the end of a two-month-long U.S. tour to raise money for a monastery in India.

The Venerable Thupten Ngodup, 17th Medium for the State Oracle of Tibet's government-in-exile, is nearing the end of a two-month-long U.S. tour to raise money for a monastery in India. He was staying in one of Ilonka Harezi's oceanfront apartments, accompanied by four other monks. They were all chanting.

Harezi's mother had died. Her photograph -- relaxed, smiling, eternally blonde -- was on the altar in front of the giant wood Buddha that had been shipped from India in three parts.

In the Buddhist tradition, it can be days or months before a soul is reincarnated. Sometimes a soul doesn't realize it has joined the ranks of the dearly departed; sometimes it does, and is understandably perturbed. In either case, recitation of the proper prayers can help the soul along its way.

When the chanting was over -- ''OK guys, now done!'' a monk announced -- Harezi confessed that she wasn't a Buddhist, just a spiritual person. ''We're just wearing these spacesuits for a little while,'' she said.

Harezi, whose background is in interior design, crude oil sales and quantum mechanics, according to her website, is the inventor of the technology behind the popular Philip Stein Teslar watch, which not only tells time but strengthens the wearer's electromagnetic energy field, according to its website. You can get a nice one at Saks Fifth Avenue for a couple thousand dollars.

How does it work its magic? ''It pings into the Triple Warmer Meridian,'' Harezi explained before disappearing down the dark corridor.

The Medium sipped from a mug of steaming water. He appeared to wear a Timex.

He had encouraging news about Harezi's mother. ''During recitations, I definitely felt her presence for a brief while. I had that feeling,'' he said, through an interpreter. ``She was pleased. That's just what came to me.''

But his real work, of course, is to speak for the Oracle, who possesses his body in order to advise the Dalai Lama on the future.

The Oracle is ''similar to a wise elder and has a wrathful persona of an ancient lord,'' according to a news release handed out by an assistant monk. ``He speaks in poetic verse and in symbolic actions. When in trance, the Medium is dressed in the ceremonial garb of ancient times.''

He offers advice on 'His Holiness' activities and about the situation in Tibet,'' said the Medium, who knows this only secondhand, because he remembers nothing of his possession.

The first time he was possessed, ''It felt like I was being electrocuted,'' he said. ``I had no memory for a few minutes. I screamed -- AAH!''

He sipped some more water. ''Perhaps you may not believe it,'' he said. ``But if you actually were to see it, a trance in action, you would believe. You would be in awe.''