Atlanta, Georgia (USA) -- The way Taiun Michael Elliston proposes you wake up is to plant yourself on a black-cushioned bench facing a blank wall and sit still. In silence. And keep sitting. 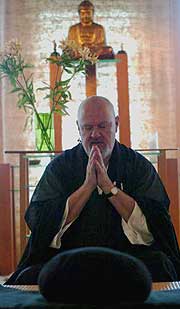 << Reneé Hannans Henry/AJC
After 40 years of study, Michael Elliston will become Atlanta's first Zen master, one of only 80 in the United States. 'Zen is not an escape,' he says, but a transcendently freeing discipline.

His disciples follow him into a small sanctuary near Emory University. They endure what is seemingly easy, but difficult to do. Human minds and bodies, especially in this modern age of myriad distractions, are not trained for emptiness.

But it is detachment that awakens your senses and lends stability, says Elliston, abbot at Atlanta's Soto Zen Center, where in a secret ceremony tonight, he will become Atlanta's first Zen master, and one of only 80 in America.

After 40 years of Buddhist study, Elliston will be formally recognized by his priestly peers as a Zen teacher who has attained a high level of enlightenment.

Elliston remains humble about the honor. He explains instead the premise behind meditation: If you can sit and do nothing, then you can virtually do anything.

"Meditation," he says, wrapping his black muslin robes about his burly frame, "makes you more acutely sensitive to everything. Zen is not an escape, but it helps you keep a balance."

In another life four decades ago, when Elliston was a free-wheeling teacher of design in Chicago, he invited a musician friend to drop acid with him. The friend told him he had traded LSD for something even better: Zen.

Elliston followed his friend to a temple and began a long journey that took him from America's heartland to the practices and beliefs of ancient Asia.

With today's ceremony, Elliston reaches a zenith. He will receive formal transmission from Zen priest Shohaku Okumura Roshi into the Soto school, one variety of Zen Buddhism.

In Atlanta, where East did not meet West as readily as it did, say, on the streets of San Francisco, Ellison's prestigious new status is cause for celebration.

Or as disciple Cherry Zimmer says: "He puts Atlanta on the Zen map."

Zen is a Japanese form of Buddhism, whose followers believe in the teachings of Siddhartha Gautama, an Indian prince who set out to find an end to human suffering in the sixth century B.C. He became the Buddha (the awakened one) after he attained enlightenment.

Buddha philosophized that human suffering can end by detaching oneself from the circumstances that cause it. Zen teaches its practitioners to discipline the body and mind to not be overcome by emotions.

"Our premise is that everyone can wake up," Elliston says.

Zen masters first landed on America's shores from Japan in the late 19th century. But the real boom in Zen studies came in the 1950s and 1960s, says Eric Reinders, an associate professor in Emory University's religion department.

He likens Elliston's honor to the validation a writer gets by winning the Pulitzer Prize.

Elliston says about 1,000 Atlantans belong to the Soto Zen Center. They come from all walks of life and represent several religions. You can practice Zen meditation, he says, and still hold onto your Christian, Jewish or Islamic beliefs. "It's more a way of life," he says. "It really doesn't contradict science. My teacher believes it's the religion of the future."

Elliston asks newcomers why they decided to visit the center, though he often knows the answer beforehand. Midlife crisis. Disappointment in organized religion. The stress of a fast-paced life.

Once he, too, was in the rat race as an environmental designer employed in the corporate world. He, too, failed at marriage, dabbled in drugs and struggled to figure out life.

Zen showed him the way. Kept his sanity intact. Two years ago, the 66-year-old retired from his job and became a full-time priest.

He floats in, as though ordained by his Zen name, Taiun, which means a great cloud or one without barriers. His teacher issued him a challenge with that name, Elliston feels.

He bows to the ground before the altar adorned with a green glass vase holding a few stems of alstroemeria, a stick of incense and a statue of Buddha. To the left is an ornately carved wooden fish drum and a set of bells that echo through the room at the start and end of service and throughout chanting sessions.

He fields his followers' questions.

"What is seniority?" one asks.

"What is the sound of silence?" another asks.

"Silence in Zen is not the absence of sound, but silence is in the sound. When we sit in [meditation], we should never be bothered by sound," Elliston replies.

They bow before the Zen master, the son of a Midwestern construction worker and a grocery store employee who finally conquered the teachings of an ancient Indian prince.

A STATE OF MIND
• Zen (n). A school of Mahayana Buddhism that asserts that enlightenment can be attained through meditation, self-contemplation and intuition rather than through faith and devotion. Practiced mainly in China, Japan, Korea and Vietnam. (Source: American Heritage Dictionary)