A flourishing temple embraces its community

PORT ARTHUR, Texas (USA) -- When the Buu Mon Buddhist Association members first bought the building in the 2700 block of Procter Street in October 1986, it had been both a Baptist and a Catholic church. 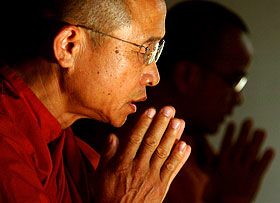 During the next year, community members pitched in to make it their spiritual haven in a strong Christian community. They took down the steeple and added a tiered stupa, which now towers above Procter Street. The front of the building took on an Asian pagoda style. Inside, an artist created a fresco painting of a large tree and a tranquil lake and mountains behind where the Buddha shrine would sit.

The lotus and bamboo gardens had yet to be cultivated when it was dedicated Aug 15, 1987, 20 years ago this week.

Now, thousands come see the expansive gardens kept up by the Rev. Huyen Viet, the temple's abbot, who pronounced the temple's consecration 20 years ago, according to The Enterprise archives.

"It seems so long ago. It's gone by so quick" Viet said in an interview earlier this week. "We've been going on very well ... The community accepts us as friends." Twenty years ago, practically all of the Buddhists were from Vietnam, coming to Port Arthur after the communist takeover of their homeland in 1975.

Now, there are many non-Vietnamese speaking Buddhist who are active in the temple's services, and several are studying to become Buddhist, said the Rev. M. Kassapa, the temple's meditation instructor.

Buddhism is considered a philosophy and way of life, said Danny Dubuisson, temple spokesman. Buddha is a great teacher or philosopher, not a god.

Buddha is the name given to Siddhartha Gotama, who lived about 2,500 years ago near present-day Nepal. He left his comfortable home and family to look for deeper meaning in life. He found it, or enlightenment, as he meditated under the Bodhi Tree, in a secluded grove by the banks of the river Neranjara, according to the Buddha Sasana Web site.

More on the Net:

Video from the temple

"In this century, our word is to bring peace to the world," Viet said, adding they also provide religious and spiritual leadership for those studying the introspective teachings of Buddha. "We do our best to take a role to make our place better."

They have tour groups come through several times a month, he added. The monks aren't sequestered at the temple and are out in the community.

"A lot of Americans are interested," Kassapa said, adding that many of the teachings focus on showing personal responsibility. "It's a chance for use to debunk some of the rumors."

The temple has also expanded. Ten years ago, the dragon and lion dancing group started, and now they perform at the temple's celebrations and other programs throughout the community.

The Lotus Hall behind the temple can sleep up to 150 people and there are plans to create a meditation retreat there, said Dubuisson, adding that air conditioning has been recently added to the main shrine and hall.

The number of monks and nuns at the temple has varied, and at times Viet has run the Buu Mon Temple solo while helping elsewhere.

Now, there are three monks here - Viet, Kassapa and the Rev. Tri Quang, of India - which makes it easier to have regular Sunday services and classes, Dubuisson said.

Initially, in 1980, they worshiped in a rented home in Beaumont, Viet said. Incidentally, "Buu Mon" means priceless gate and sounds similar to Beaumont, which is why it was chosen, according to the archives.

A year later they moved to Orange to a building at the corner of Texas 62 and FM 105 and began to look for a larger building, he added.

Viet came to Southeast Texas two years before they moved into the Procter Street building.

"If we wouldn't have bought it, it would have likely been demolished," Viet said of the current building.

The building in Orange later became a restaurant, but a fire destroyed it, he added.

In 1990, the 7-foot gold leaf Buddha that now sits in front of the fresco arrived, completing the renovation, according to the archives.

The temple commissioned the image from an artist in Thailand, according to the archives.

Vases filled with flowers and dishes of fruit were on the tiled alter earlier this week.

"We pay respect to Buddha for his teachings," Viet said. "Pick a right way of life to have spiritual nourishment every day."

"We love the gardens," Nugyen said, who comes from Houston to attend the Wednesday night meditation classes at the temple.

The lily, lotus and bamboo plants in the gardens make her feel like she's back in her homeland in Vietnam, which she left in the 1980s.

"Here is closer to my home," Nugyen said. "It's very peaceful."