The Dalai Lama is at home here: Buddhist leader's ties to Georgia not new, not just academic

Atlanta, Georgia (USA) -- The memory of heavenly cheese grits and Southern hospitality may have tempted the Dalai Lama to make Atlanta his North American seat. 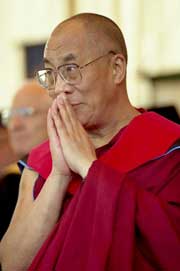 << For the Dalai Lama, Atlanta is another place to freely spread and preserve Tibetan culture and teaching. - Sam Cherribi

Or perhaps recollections of Mary Mac's Tea Room, where in 1995 the Buddhist holy man dined with actor Richard Gere on — what else? — soul food.
Special

The people at Emory University like to think the quality of their institution lured him here.

The truth is, the Dalai Lama's unique connection with this city was cemented by a friendship between a then-Emory professor and a young Buddhist monk from the mountainous northern reaches of India.

Robert A. "Bobby" Paul, now Emory's college dean, and the young monk, Lobsang Tenzin Negi, born in the remote Kinnaur Valley in the Himalaya Mountains, hit it off while Negi was visiting Atlanta in 1990.

The result of that friendship between Paul and Negi grew to benefit Atlanta and the Dalai Lama, a Nobel Peace Prize winner.

The city gets regular visits from the internationally known and admired head of Tibetan Buddhism. Next weekend, he will be in town for three days to be installed as a presidential distinguished professor at Emory and for a series of lectures on Buddhism, peace making, and the intersection of mental health and Buddhist understanding of the mind.

For the Dalai Lama, Atlanta is another place to freely spread and preserve Tibetan culture and teaching. His homeland has been occupied since 1950 by the Chinese, who suppress its people and religious practices. He has been in exile from Tibet since 1959.

He has established the Drepung Loseling Institute in Atlanta, a learning center that is affiliated with Emory thanks to work spurred by Paul's and Negi's friendship.

The Southern food the Dalai Lama eats on his visits is just gravy on an already sweet deal.

He was introduced to the creamy wonder of cheese grits after receiving an honorary degree and giving the commencement speech for Emory in 1998.

After his speech, in which he kidded students that they had to work a lot harder for their Emory diplomas than he did, he went to the university president's home for a luncheon.

"He was fascinated with the cheese grits and loved them," Hauk said. "I remember his commenting about how wonderful they were, and his deciding to go back for seconds."

After a 1995 visit, the Dalai Lama and actor Richard Gere, America's celebrity Buddhist, stopped in.

His crimson and saffron robes confused her when she saw him getting out of the car.

"I thought he was a lady Dalai Lama at first. Because somebody said the name Dolly, you know?"

"I didn't know he was a big-time church man," Mims said.

"He loved it," Mims remembered. "He blessed us and everything."

Good thing, too. Because that same day, a Mary Mac's employee wrecked his motorcycle. "He didn't have a scratch on him," said the suitably impressed Mims.

"I told everybody, the Dalai Lama really blessed [him]," she said.

Cheese grits and blessings aside, getting the Dalai Lama to Atlanta was a long, slow process.

Bobby Paul, 65, lived in Nepal in the mid-'60s and studied Tibetan culture along that country's border as part of his studies in anthropology. Emory hired him in 1977.

Negi, now 47, was something of a whiz kid, on his way to achieving in a mere 20 years the highest academic and spiritual degree Tibetan Buddhism awards — that of Geshe. It typically takes about 23 years.

In 1989, he was traveling with other monks on a world tour of Buddhist sacred music and dance that passed through Atlanta.

While he was here, a Georgia donor gave their monastery a piece of land near Blue Ridge. Negi returned in 1990 with other monks to consecrate the property, and was introduced to Paul by another professor.

The Eastern monk and Western academic were mutually attracted. Paul was interested in learning more of Tibetan Buddhism.

Negi was interested in a Western education and felt at ease with Paul and his wealth of knowledge about Tibetan culture. "It was fairly unique to have someone trained, who has achieved the highest rank in Tibetan monastic training, so completely educated in Buddhist tradition and meditation techniques here," Paul said.

He wanted to take advantage of that. Paul foresaw Emory as a trading post between East and West that would enrich both cultures. He began talking to Negi about studying at Emory.

In 1991, the Dalai Lama asked Negi to help develop Drepung Loseling Institute in Atlanta. It is named after a 600-year old Tibetan monastic university, now the monks' main monastery in India.

Monastic universities are centers for learning of all kinds, not just religious. The institute here holds weekly classes and lectures on Buddhism and cultural events such as artistic performances.

Negi accepted the Dalai Lama's challenge and came to Atlanta.

Paul wanted Emory students to study at the institute. "I said, we should think of this as a study abroad program, but right here," he said.

Then he realized, why not send students to study in Dharamsala, India, where the Dalai Lama has his headquarters, and have monks come to Emory to teach? The university would want a formal agreement for that.

Paul and Negi began cooking up ideas for linking the two seats of learning. Others at the university got behind them.

When Negi returned to Dharamsala in 1994, he presented the idea to the Dalai Lama, who seemed delighted and surprised.

"Do they really mean it?" he asked Negi.

He gave Negi permission to proceed, but to "start small" and see what happened.

The two sides signed a formal agreement in India in 1998, and the Dalai Lama came to give the commencement speech for graduates.

The links have continued to grow and the program has sent more than 100 Emory students to India to study Tibetan culture, language, philosophy and civilization for a semester.

In return, Negi, now an American citizen and an Atlanta resident, lectures at the university, and about 15 monks come here each year to study or teach a semester of religion, psychology, medicine and art.

Atlanta has become the trading post of ideas that Paul and Negi envisioned.

Hauk recalled a moment that crystallized for him the relationship between the Dalai Lama and Emory.

After the 1998 visit, the Dalai Lama was leaving a reception at the Michael C. Carlos Museum on campus when he spotted a replica of the Rosetta Stone. He wandered over to eye it.

The original stone, found in Egypt in 1799, was inscribed with information repeated in three languages: Greek, an ancient Egyptian dialect and hieroglyphics. It gave the modern world the key to translating hieroglyphics, which had been little understood.

"He turned to me and he had this profound look of appreciation on his face for this key to unlocking the mysteries of a different culture. And he said, 'This is what we are about,' " Hauk said.

FROM SCHOLARSHIP TO SAND PAINTING

The schedule of events for the Dalai Lama's visit:

Buddhist monks perform music and chants and create a mandala, or sand painting, in honor of the visit. Opening ceremony at noon requires tickets. Exhibit is free and continues through Oct. 23. Woodruff Physical Education Center.

• Dalai Lama lectures and is installed as presidential distinguished professor. Emory University. Not open to the public.

HOW TO LEARN MORE

• Information and tickets to public events: 404-727-5050 or www.dalailama.emory.edu/events/index.html