Georgia, Atlanta (USA) -- H-E-L-L-O D-A-L-A-I. Those were the black-and-yellow letters painted on the five bare chests and backs of Georgia Tech students in Centennial Olympic Park on Monday afternoon for the Dalai Lama's public address. 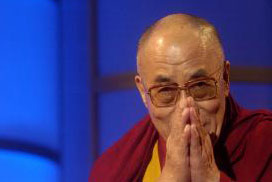 << 'I really feel full of human love and affection for this university,' the Dalai Lama says at Emory.

Ross Taylor, the "E," chimed in, "This is our peaceful shout out to the Dalai Lama."

An eclectic crowd of several thousand filled the lawn, gathering to hear the Tibetan holy man talk about educating the heart and mind. Some came in business suits, others sporting green hair. They brought a rock concert atmosphere to the last public address of his long weekend in Atlanta.

The Dalai Lama, a Nobel Peace Prize winner, was welcomed by Emory University President James Wagner and U.S. Rep. John Lewis. The Dalai Lama told the crowd he was happy to be in the home of another Nobel Prize winner, the Rev. Martin Luther King Jr.

"Atlanta has a great significance, and it is a great joy for me to be with you today, the citizens of Atlanta," he said.

He talked about the concept of "inner disarmament" and its capacity to lead to world peace.

"To deliberately try to reduce anger, hatred, jealously" will lead to outer disarmament, he said.

Sarah Layton, a Georgia State University student, arrived in a tie-dyed shirt carrying a Frisbee and said she attended the Dalai Lama's teaching on Buddhism at Emory Sunday.

"This has been a very positive experience," she said.

Her boyfriend and fellow student Brian Therow said, "How often do you get to see a spiritual icon like this?"

Zachary Baxter, a Marietta street preacher, thought it was about once too often. He stood outside the park trying to warn people off.

"He is sending millions of people to hell. I don't believe this is right," he said.

Earlier Monday, Emory installed the Dalai Lama as its newest faculty member to the sounds of bagpipes mixed with traditional Tibetan long horns.

He seemed to relish the honor, repeatedly referring to himself as professor and laughing. "I really feel full of human love and affection for this university."

He joked he's a "lazy person" who won't assign much homework. "I will most likely be a hopeless professor."

It is the first time the Tibetan spiritual leader has accepted a post at an American university, and it is the culmination of more than 15 years of work between Emory and the Tibetan exile community in Dharamsala, India. The Dalai Lama fled Tibet after the Chinese invaded in 1959.

At the morning ceremony, Emily Allen, the president of the Student Government Association, presented the Dalai Lama with an official Emory ID faculty card, as the crowd laughed.

"It is a privilege to share our Emory with you," she said.

The Dalai Lama's famous sense of humor shone through the events of the day. At his installation, a formal affair, he held Wagner's microphone for him when there was a technical glitch.

"This man is a genuine human being," Wagner said. "It's hard to get back to the formal script."

After his installation, the Dalai Lama, in an intimate ceremony with chanting monks and about 80 people, blessed the new Drepung Loseling Monastery in Atlanta near DeKalb-Peachtree Airport.