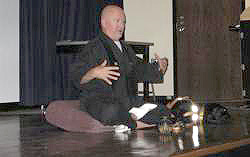 Buddhist monk Peter Mugan Schellin speaks Thursday evening at East Carolina University on being engaged socially as a Buddhist. Reflectors on his seeing eye dog's harness were illuminated by a camera flash.

Schellin described marching on Washington in protest of the Iraq war with other like-minded Buddhists earlier this year to a crowd of about 40 in Speight Auditorium in the school's art building.

"Engaged Buddhism maintains a non-violent approach in the tradition of Ghandi and Martin Luther King, without the attachment to the outcome," Schellin said.

Buddhist practices do not get wrapped up in outcomes, Schellin explained. Buddhists are more concerned with recognizing faults and problems and accepting the world as it is.

Schellin appeared at ECU as part of the Countdown to Peace collaborative art project recently displayed in the Mendenhall Gallery. He is a professor emeritus at California State University, Los Angeles, where he taught art theory and education.

Schellin is legally blind and was accompanied on stage by a seeing-eye dog, Nemo.

"I have eye disease and it is progressive," he said.

"My experience, inside of myself, is that I am content anyway," he said, explaining how his Buddhist beliefs have helped him through rough spots.

Schellin described the different schools and practices of Buddhism as it has evolved in various places like China, Japan and Vietnam. He encouraged the audience to research the practice further.

He lead the audience in about five minutes of meditation, telling them to concentrate on their breath and repeatedly count to 10.

One audience member asked afterwards if thinking about his lungs filling with air was acceptable when he was suppose to be concentrating on his breath.

"That is it," Schellin said. "I bet you have never thought about your lungs filling with air before, unless you are a long-distance runner."

Schellin said many realizations are possible through meditation and even small ones can be important.

Schellin describe Buddhism as being the "Middle Way" between two extremes of reaction and repression.

"The middle way is observation — we have a joke — don't just do something, sit there," he said.