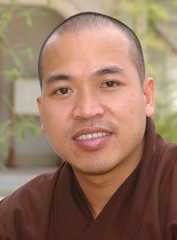 A political power struggle between the head monk and the former board of directors seems to have reached a boiling point.

"Several of the temple members are wanting the head monk to step down, but for what reason, we don't know," said police Sgt. Jackie Rhodes. "Basically, we just told them to go through their board of directors and that this was not the place to handle it."

Thien Tri has been the head monk and director of the Van Duc Buddhist Temple for four years. He is up for re-election Dec. 16 and former board members, as well as other temple members, are less than pleased with the job he is doing.

Some local Buddhists are unhappy with the way Tri has run the temple and others claim the temple is dealing with profound financial issues.

When the Sun Herald visited the temple Thursday morning, a man who called himself "Jack" met reporters in the parking lot and said Tri was not available for comment.

Jack said the former board of directors and the angry temple members were nowhere to be found after Hurricane Katrina in 2005 and Tri was left to rebuild the temple essentially on his own.

Now that the 18-year-old temple is again in tiptop shape, Jack said the old leaders want their power back, and Thursday they twice showed up to get it.

"Buddhists are not about overpowering," Jack said in reference to the former board. "So don't come here and distract from the peacefulness of this temple."

The monks estimate only 30 percent of the local community is Buddhist, but it's more like 80 percent in Vietnam.

Local Buddhists said Tri arrived in California from Vietnam sometime in the last decade and was sent to the Biloxi temple just before the storm.

About a dozen people were involved in both disputes Thursday, but Biloxi police said no one was arrested.