Louisville, KY (USA) -- In San Francisco yesterday morning, city officials tightened security and braced for an onslaught of protesters demonstrating as the Olympic torch made a U.S. stop on its journey to Beijing. 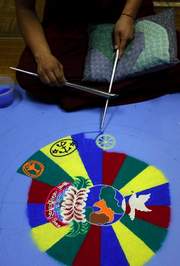 << Yeshi Palden, a Tibetan monk, said his sand painting will include symbols for elements, animals, land forms and people.

In Louisville yesterday morning, a soft-spoken Tibetan monk sat in an apartment above Frankfort Avenue's Zen Garden, patiently bent over the beginnings of a vividly colored sand painting.

The activities in both cities were meant to spotlight the Chinese government's alleged human-rights abuses and crackdown in Tibet -- though artist Yeshi Palden said his method is more subtle.

"There is much danger. It's not safe," Palden said of Tibet. "Many people have been killed, injured or put in jail."

Palden, who lives in New York, is a guest of St. William Catholic Church and the Zen Garden this week while he creates his world peace sand mandala.

The monk, who visited Louisville about two years ago with a group of other monks, "created this design from a vision for world unity and peace and he's giving it as a gift to the Louisville community," said Anne Walter, formation minister at St. William's.

"He wanted to create this mandala, and through a couple different conversations, we decided that Louisville would be a good place for him to do it."

Sand mandalas are a Tibetan Buddhist tradition but are usually temporary, Walter said.

"They will scoop up the sand when they're done and release it into the river or wind as a prayer," she said. "But this one will be fixed and we will keep it as a symbol."

Palden started his large circular sand painting Tuesday and plans to work on it every day from 10 a.m. to 5 p.m. until Monday, when a world peace prayer service is held at the Zen Garden, Walter said.

Yesterday, Palden was working his way from the middle of the mandala out to other sections. In the center are a picture of Earth and a dove. It says "world peace" in English and in Tibetan. Then, rays of bright red, blue, green and yellow reach out from the center and symbols from a variety of world religions are in the rays.

As Palden progresses, there will be symbols for elements, animals, land forms and people, he said yesterday.