From Irvine to India

Richmond, KY (USA) -- It all started with a library book Robbie Grove happened to open at the library when he was 11. 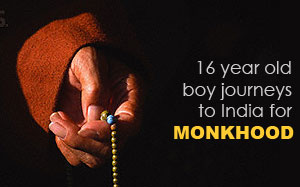 The book, a biography about the Dalai Lama, sparked his interest in Buddhism and led the 16-year-old Irvine resident to become an ordained Tibetan Buddhist monk and travel to India for at least 12 years to further his education to earn his Geshe degree.

“I didn’t even know who the Dalai Lama was,” Robbie said. “Looking back four or five years ago, I would have never thought I’d be doing this. I thought I was going to become an anthropologist.”

“The main point of Buddhism appealed to me of the purpose of life being to end suffering,” he said. “That really appealed to me instead of faith or anything like that.”

For about a year, Robbie has met about once a month with a Buddhist teacher, Geshe Sangay Gyatso, who has a meditation center in Louisville.

Around that same time, he learned about the Sera Jey Monastic University in southern India.

Robbie will go to the monastery, which holds more than 3,000 monks, sometime in November or December to begin his studies.

Completion of the program takes an average of 12 to 24 years, said Robbie, who will have to learn the Tibetan language.

“It covers the entire Buddhist philosophy,” he said. “The day is consisted of debate, studying, reflection and you go to class with various gurus. It’s a pretty busy day.”

“It’s an entire complex,” Robbie said. “So, for my entire study period, that’s where I’ll be. But, afterwards, since I’m a western monk as opposed to a Tibetan monk, there’s an organization I’ll probably be involved in. After I’m done with my study, I’ll probably be teaching or leading retreats or maybe visiting prisons.”

Robbie first approached his parents about moving to India last year when he was 15.

“Of course, I thought it was crazy,” said his mother, Mary Jo Grove, who works at the Richmond Register. “No way was I going to let him do it. The first time he asked me I thought if I put him off he’d grow out of it. But he didn’t.”

About four months ago, Robbie decided to sit down and write his parents a letter detailing his dream of becoming a monk and how he was not happy living in Estill County.

Hearing how serious and passionate he was changed his parents’ mind and they decided to let him go on his journey.

“My husband (Steve) and I did not have children to tell them what they can and can’t do in their lives,” his mother said. “As long as I’ve raised my kids, I’ve told them that they can do anything they want to in life. Who am I to tell him that this is not what he should do with his life?

“You raise them, you teach them good morals and give them a good grounding, then you have to let them go at some point,” she said. “Ever since we told him he can do this, he’s been happier than I’ve ever seen him.”

Even though he may be young in age, Mary Jo said her son really is “an old soul.”

She plans on getting a passport and visiting him next summer.

In the interim, Robbie will be able to communicate with his family and friends through the Internet and by telephone.

However, that will not make it any easier, his mother said.

“It’s very difficult,” she said. “Robbie’s my best friend. I’m his number one fan. So, it’s very hard to know that somebody who can make you laugh in two seconds or bring you up when you’re feeling down is not going to be there. I love him more than anything.

“But, you have to realize as a parent, are you going to be selfish and not let them do something because you’re going to be sad about it?,” Mary Jo said. “I can’t do that.”

Robbie would have been a sophomore this year at Estill County High School.

But, he plans on earning his GED before he leaves, adding one more task to complete in preparation for the move.

“I’m mostly excited,” Robbie said. “I’m a little stressed out trying to get everything in order. It hasn’t really hit me yet I don’t think. It will eventually.”

“I’m just trying to accustom myself to what they say about culture shock,” he said. “Not only is it a foreign country, it’s India. It’s not like I’m going to France or anything. It will be shocking landing in Delhi in a city of nine or 10 million people.”

Like a marriage, Robbie said the process of being a monk is something he will have to work at.

But, it will ultimately be more than rewarding, he said.

“I think it will be the best decision I’ll probably make in life,” Robbie said. “Taking ordination as a monk will probably be the foundation for the rest of my life.”

“It’s a lifetime commitment,” he said. “It’s definitely going to be a drastic change.”

If things do not go exactly as planned in India, Robbie will always have his family, his mother said.

“We’ve told him that if he gets off the plane and gets over there and it’s overwhelming, come straight back,” she said. “He can leave at any time he wants to and come home.”