Clovis, NM (USA) -- Tech. Sgt. Chris Porter said he is often asked how he resolves being a Buddhist and being in the military. 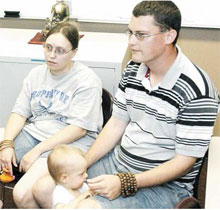 << CNJ staff photo: Gabriel Monte
Tech. Sgt. Christ Porter, right, and his wife Marisila, left, run a Buddhism discussion group at the Cannon Air Force Base chapel. Chris Porter said he and his wife are new to Buddhism having formally adopted the religion in June.

Though Porter works as a bioenvironmental engineer at Cannon Air Force Base, he said he believes the use of force is acceptable as long as his motivation is rooted in compassion and love. Buddhist philosophy emphasizes pacifism and self control.

Porter and his wife, Marilisa, run a Buddhism discussion group at Cannon to invite other base personnel to share their experiences with Buddhism, according to Porter.

“We felt like we were the only Buddhists in Clovis,” he said.

The weekly discussion group has met five times and Porter said attendance has been one or two people. He said he also receives phone inquiries.

David Porter, who grew up Methodist, said he and his wife became Buddhists after learning about the religion for years.

“I was just drawn to it, started studying and reading about it and liked what I read,” he said.

David Porter said since adopting the Buddhist lifestyle, which includes meditation, he is calmer.

“I always have a better day when I mediate in the morning,” he said. “My interactions with people are a little bit better.”

Porter’s wife Marilisa, who was raised as a Catholic, said her temper has subsided since practicing Buddhism.

The Porters attended an event at the University of New Mexico in June where a Buddhist teacher was speaking. At the end of the event Porter said the teacher held a ceremony for people who wanted to join the religion.

Capt. Eusebia Rios, a base chaplain, said the Air Force provides venues, either on base or in town, for airmen of all religions.

“This is our goal: Where there is a religious or spiritual need, we want to accommodate that,” she said.

She said airmen who want to conduct services on base for a particular religion can make a request to a base chaplain.

The Buddhism discussion group will meet at 7 p.m. Monday at the Cannon chapel.