Planners urge monks to close down their temple

By Deirdre Fernandes, The Virginian-Pilot, August 14, 2008 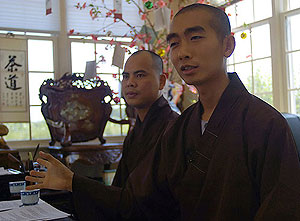 << Vietnamese Monks, Chuc Thanh, left, and Chuc Hoi speak last year about the problems they are having in the Pungo community in Virginia Beach. (Gary C. Knapp | The Virginian-Pilot)

In a 6-4 vote, the planning commission recommended that the monks shut down their temple in a brick ranch house off West Neck Road in rural Virginia Beach.

The Buddhist Education Center of America Inc. had requested a two-year extension to a permit issued last August by the City Council that allowed the organization to hold worship services in the house.

The master Buddhist monk lives in the house, along with some younger monks, and worshippers come there on Sundays and for three celebrations during the year.

The monks have unsuccessfully tried to find a new location for the master's house and temple. Selling the nearly $1 million home in this real-estate market is almost impossible, said Morris Fine, an attorney representing the monks.

Some residents and several planning commissioners said that would be unacceptable.

The temple location was controversial last summer, when City Council agreed to allow the monks to stay, but only for a year, commissioners said.

The time is up, Commissioner Eugene Crabtree noted, adding. "It makes no difference what religion they are."

Most residents said they had no problem with the monks. They've spotted them around town with their brown robes and shaved heads. They say "hello " when they meet.

But the traffic that the Buddhist worship services bring to the neighborhood is a problem, residents said.

The monks haven't put up a "For Sale" sign on the property, although they knew they had a one-year deadline, he said.

"In my view, nothing has been done," Cullipher said. "The strategy is not to relocate."

Commissioner David Redmond said marketing the property would have been pointless in the current economy.

"Their hands are tied," Redmond said. He supported a one-year extension, because the monks have abided by all the rules of the permit.

But religious facilities were prohibited at both locations because they are near Oceana Naval Air Station, said Faith Christie, a city planner.

Monk Thich Chuc Thanh said that he and the others are happy at their current location, and after moving from the Kempsville area two years ago because of a road project, they dread having to move again.

The City Council will be asked to decide in the next month whether they can continue to live there.