Federal judge to decide if Buddhist monks stay or go

VIRGINIA BEACH, VA. (USA) -- There's new insight on a story about religion and rights MyFox Hampton Roads has been following for months. 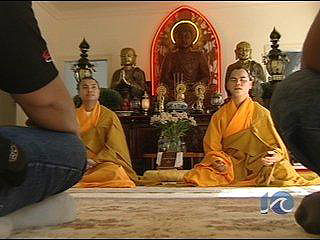 A group of Buddhist monks in Virginia Beach says the city's refusal to renew a conditional use permit, allowing it to operate a temple in a home is a violation of its constitutional rights.

Now,  a federal judge will have to decide the case.

The Buddhist monks of Pungo say their Temple-Home is open to their neighbors and people of all faiths as Buddha himself instructed centuries ago.

Buddhist Monk Chuc Than said, "You keep your religion, but you can practice my philosophy...wisdom to them how to live the happy life"

The monks say services held at the temple teach followers the path toward enlightenment and inner peace.

Though, not everyone is at peace with the temple being in Pungo. Neighbors opposed to it say it's not about religious freedom, it's about zoning.

"When we moved here we were told that this is just farming area and houses," said neighbor Dr. Carmen Maldonando.

Responding to a citizens' petition, city council recently refused to renew the monks conditional use permit to operate the temple, citing zoning regulations.

Virginia Beach Deputy City Attorney Mark Stiles says, "The monks are welcome to engage in their religious activities here in the city of Virginia Beach, just not at that particular location.  It's a residentially zoned lot."

Buddhist Christopher Truang disagrees, "I think that the monks have the right to stay here"