Tucson, AR (USA) -- Buddhist scholar Losang Samten has learned a lot since he first came to the United States 20 years ago. 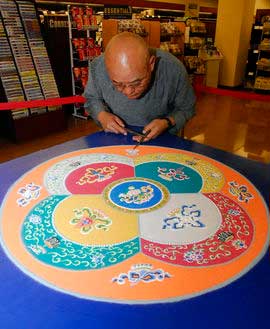 Like not to travel with pure, white sand through an airport.

Although his reason for packing the sand was innocent enough - Samten uses it to create intricate and fragile sand mandalas - New York City airport officials detained him for hours.

"I had no idea what they were looking for," he said. "Coming from the monastery, I had no clue about the drug thing."

Former monk Samten, 55, suspects his trip to Tucson later this month will take less time at the airport. But once he's here, he'll be embarking on a monthlong project at the University of Arizona BookStore, 1209 E. University Blvd.

The symbol Samten will be creating is the Kalachakra mandala, also known as the Wheel of Time. It represents a three-dimensional palace where every detail has a symbolic meaning that refers to the universe.

He'll be stationed in the store's lower level in the Student Union Memorial Center.

People are invited throughout the month to watch, ask questions and chat with the venerable Samten. He's been creating sand mandalas for the past two decades at museums and universities around the world.

This is his third trip to Tucson and his biggest project here.

"It will be wonderful to do this in Tucson," he said. "We are all looking for change and peace."

Each symbol also represents a shift toward an awakening and inner peace.

"I really see this as speaking to people on so many levels," he said. "I want people to see really how important inner peace is. It will also give an appreciation of ancient culture."

Tucson, Arkansas (USA) -- "I was in India, the home of the Dalai Lama, and it gave me a chill," he said. "I was thinking to myself, 'Wow.' At the time, I didn't know I would create this kind of design - and to be doing it by myself."

<< Buddhist scholar Losang Samten works on a mandala at the University of Arizona BookStore when he was in Tucson last April.

Because the mandala is so revered and previously only used at religious ceremonies, Samten had to obtain special permission from the Dalai Lama to create it in public.

Samten was born in Tibet, which was invaded and annexed by China in 1951. He and his family fled in 1959, first landing in Nepal and later India.

He spent many years as a Buddhist monk and came to the United States in 1988 under the direction of the Dalai Lama.

His mission was to demonstrate the meditative art of sand painting.

"I believe that the construction of a Kalachakra sand mandala in Tucson is a great blessing to our community," said Peggy Hitchcock, president of Arizona Friends of Tibet, one of the sponsors of the event.

Other sponsors include the UA BookStore, the UA Department of Anthropology and University Information Technology Services.

Samten gave back his monastic vows in 1995 to pursue teaching and learning.

He has established three Tibetan Buddhist centers in the U.S., one each in Hartford, Conn., El Paso, Texas, and Philadelphia.
TOP